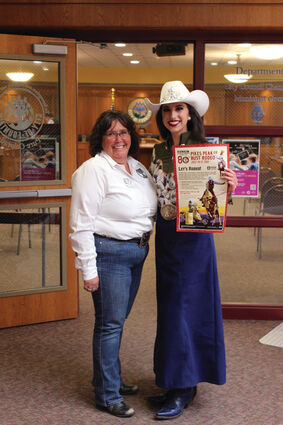 Girl of the West Georgia Strimenos, right, and Sharon Iverson, assistant to the director of the Girl of the West Program, display a poster for the Pikes Peak or Bust Rodeo at last Tuesday's Fountain City Council meeting.

At its June 8 meeting the Fountain City Council discussed the $7.7 million in federal aid expected through the American Rescue Plan Act (ARPA). Officials also reviewed the city's current budget status and outlook for the 2022 budget.

The city is still finalizing how it intends to spend the ARPA money, but officials expect to be able to offer local business microgrants up to $15,000 once again. Other priorities include offering $1,000 in hazard pay to public safety employees in recognition of their work during the COVID-19 pandemic; improvements to water and sewer infrastructure; broadband investments; etc. Restrictions for how the money can be spent are numerous, and generally related to the COVID-19 pandemic and its effects.

The city expects to get half of that money this month, and the rest sometime next year.

Approved the extension of a temporary road impact fee, which is a fee imposed on new development to help pay for future street needs. The fee for new single-family homes is $3,830, for example. The fee will be updated once the city completes a study on future impacts.

Approved an agreement with Challenger Homes for construction of new water infrastructure to accommodate the next addition to the Ventana neighborhood, known as Ventana South. The development will require a 36-inch transmission main to be constructed from South Santa Fe Avenue to Old Pueblo Road, and a 12-inch main from the 36-inch main in Link Road north along RMB Court to the Ventana South. City officials say the improvements, especially the large main, will benefit other users in the area.

Challenger will pay for the improvements in exchange for a reduction in water connection fees to the city until Challenger has recovered its costs for the mains or when Ventana South is completed, whichever comes first.

At a previous meeting, the council voted to give final approval to an overall development plan for Cross Creek Church, which seeks to expand on its property on C&S Road by building new structures and replacing existing portable units.

Approved a contract for the construction of a structure covering the new water treatment facility north of Aga Park. The city has reached an agreement with the U.S. Air Force for reimbursement of up to $1.5 million – an expense that the Air Force previously had not intended to cover. This structure will protect the ion-exchange equipment used to remove PFAS chemicals from the city's groundwater.

Sharon Iverson, assistant to the director of the Girl of the West program, said it began in 1922 with two young rodeo ambassadors, who represented the Western way of life and promoted the Western type American girl at the Pikes Peak or Bust Rodeo and similar events. Girls are chosen based on skills such as speech and horsemanship