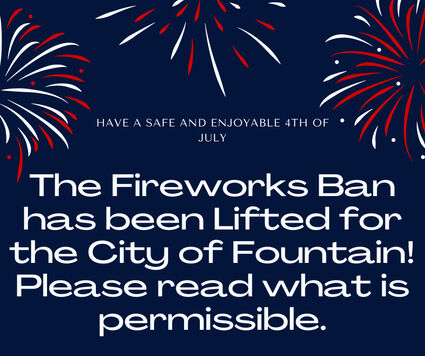 The city of Fountain lifted its fireworks ban just in time for the July 4th holiday weekend.

UPDATE (July 2): As of this morning, the city of Fountain has lifted its ban on fireworks. Officials cited the large amount of moisture received in recent days as the basis for this decision.

•Wheels with 200 grams or less of explosives, 60 grams per driver unit.

•Ground spinners with 20 grams or less of explosives.

•Illuminating torches with 200 grams or less of explosives.

•Dipped sticks and sparklers with 100 grams or less of explosives.

•Snakes or glow worms with 2 grams or less of explosives.

•Tube devices with 500 grams or less of explosives and a shower of sparks no more than 15 feet above the ground.

The city of Fountain announced it would not allow the sale, use or possession of fireworks in city limits, effective June 10. There is no end date for the ban at this time.

"The city will continue to assess the situation related to the use of fireworks and update this decision accordingly," a city press release stated.

Fire Chief James Maxon said this year's potential for fire is a major cause for concern. Typically, Fountain allows fireworks May 31-July 6 but reserves the right to ban them if the fire chief determines conditions to be unsafe.

"It is unfortunate that we have to ban fireworks; however, the conditions are just too unsafe to allow them right now," Maxon said. "Implementing a fireworks ban is done in the best interest of all our residents, and I'm confident our community will continue to support their first responders' efforts to keep everyone safe."

At the time of the city's announcement, all of unincorporated El Paso County - including Security and Widefield - was under a fireworks ban. However, late Monday the El Paso County Sheriff's Office rescinded the ban.

"Our county has various topographical features where some terrain may experience large amounts of moisture, but other portions remain dry and may have a higher risk of fire, but at this time does not warrant going into fire restrictions," according to a Sheriff's Office statement.

Pursuant to CRS 32-1-1002(3)(a), the chief of each fire protection district has authority over the supervision of all fires within their district; local fire districts may have codes, regulations, policies or standards that may still be restrictive and/or prohibit certain activities as it relates to fire and open flame. Some jurisdictions may also require a permit other than what is required by the county for fire related activities.

In Fountain, Police Chief Chris Heberer vowed to have extra patrols throughout the city this Fourth of July to crack down on any illegal fireworks activity.

Some residents in attendance at last Tuesday's City Council meeting were there to plead for better enforcement of the usual ordinance, which permits fireworks May 31-July 6. They said last year's fireworks set off by residents were oftentimes the illegal variety, and they feared for the safety of their properties.

"It was just horrifying," Jutta Smith said. "Our streets were covered in smoke for hours. It looked like a war zone."

Penny Cimino said last year the fields around her house were so dry the ground crackled under her feet. She also claimed residents setting off fireworks said this year's would be even bigger.

Heberer said he intends to pair fire and police officers for the July 4 time period, actively looking for illegal activity.

"Our plan is to step up enforcement by additional patrols," he said. "We will cite and confiscate fireworks."

Mayor Gabe Ortega noted that while Fountain has allowed fireworks in recent years, many of the large ones being set off are actually illegal. Some people travel to Wyoming to purchase those and use them here. This year most every type will be illegal.

"As much as everybody loves fireworks, we've just gotta be safe," Ortega said.

City ordinance 1663, passed in 2015 by City Council, allows the city to ban fireworks when dry weather or fire conditions preclude the safe discharge of permissible fireworks.

Fireworks vendors that normally pop up in area shopping center parking lots did not arrive as usual this year. Maxon said he warned them last year that they city might not permit them if conditions weren't right.