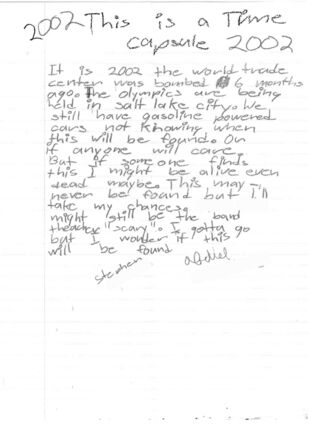 Recently as Fountain-Fort Carson School District 8 staff were helping to prepare the Dean Fleischauer Activities Center (DFAC) on West Alabama Avenue for the new Fountain Valley YMCA, this letter was discovered behind some sound panels in the band room.

The district posted an image of the letter to its Facebook page, describing it as "a fun and sobering look back at the world, according to two middle schoolers."

World events on their minds included the 9-11 attacks and the Olympics in Salt Lake City.

The post spurred plenty of speculation as to who the authors were, as well as the meaning...