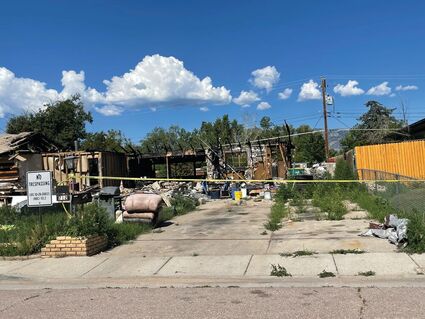 Police tape lines the driveway of 712 Widefield Drive on Sunday, more than five months after a fire destroyed the house, while the rest of the property remains unsecured.

A burned-out house across the street from Widefield High School continues to frustrate neighbors, who worry about mold and other dangers arising from the pile of rubble that is easily accessible to passersby or curious children despite police caution tape around the perimeter.

"It's a living hell," one neighbor said.

El Paso County spokesman Ryan Parsell said the county is just as unhappy with the lack of progress as neighbors are.

"That's something that we want to get done just as much as they do," he said.

This spring the county obtained all the necessary legal permissions to have the property completely cleaned up, but a bid for the work that was distributed in May – with an estimated start date of June 7 – got zero responses.

An inspection earlier this year confirmed the property contains asbestos. Parsell said only certain contractors are qualified to secure and clean properties contaminated with asbestos, limiting the applicant pool. In addition, recent labor shortages and skyrocketing material prices may have played a role in the current predicament.

When asked why county crews couldn't secure the rubble with something more than police tape, Parsell explained that "it really does need to be done by certified contractors; we've got to get that piece in place first."

Parsell said he expects the project to go out to bid again shortly, and officials are hopeful they'll get a response.

"We're trying to reach out to some other folks to get them to apply," he said. "It's as much of a priority for us as it is for the people involved that live near it."

Much of the house at 712 Widefield Drive burned down Jan. 20. Officials said the cause appeared to be residents cooking indoors on a propane stove.

At the time of the fire, the county already was in the process of getting permission to abate the property, which had been in disrepair and a magnet for criminal activity for several years.

After the fire, the Colorado Department of Public Health and Environment (CDPHE) recommended the county secure and stabilize the property with the use of fencing and poly sheathing material to prevent the property from being further disturbed. 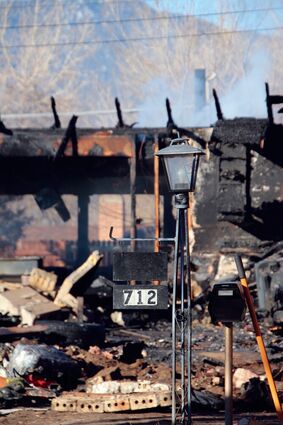 The house at 712 Widefield Drive burned down on Jan. 20. Rubble has remained ever since.

On April 22, an El Paso County District Court granted the county's motion for a preliminary injunction authorizing the county to remove all persons from the property and to secure and stabilize the property until it can be fully abated.

While residents seem to be gone, multiple neighbors report that nothing besides basic police tape has ever been placed around the perimeter and that people could still get into the property quite easily. One resident says she is very concerned about the possibility of black mold developing with all the rains over the last couple of months, and that children are still able to get in.

The resident said neighbors were informed they could call the Sheriff's Office if they see someone trespassing, but the concern is that people could get away before deputies are able to respond.