Water in the Valley: Is there enough? 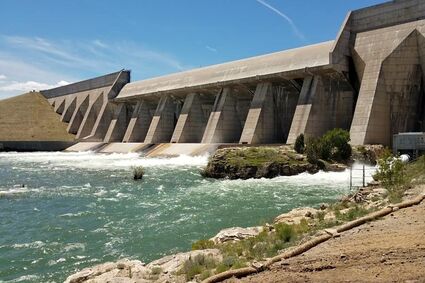 With droughts currently covering almost half the state, many Fountain Valley residents are wondering how water supplies are doing. This is especially true after reports several weeks ago that the city of Fountain had turned down development plans due to not being able to provide water for new homes. To see if there was any truth to these claims, and how things are doing across the board, this paper contacted the local water officials:

"We have a limited capacity for new taps, and we are issuing those on a first-come, first-serve basis," he said.

Over the last decade, Fountain has added 100-200 new taps each year. Blankenship estimated that right now the demand for more taps is higher than usual, but whether that trend continues depends on developers.

Regardless of how much Fountain expands, the city's long-term supplies are looking good.

"Our raw water supplies are 100 percent full," Blankenship said. "Raw water is water that is in storage that is waiting to be treated, and our raw water storage is equivalent to two-plus years of water consumption."

Most of Fountain's raw water supply comes from Pueblo Reservoir, of which the city leases a section. As of press time, that section is entirely full. Blankenship said that there are no big concerns about that situation changing.

Fountain residents can get a copy of the water capacity analysis by emailing Blankenship: [email protected] This analysis will eventually be included in the Water Master Plan, which was mentioned in this paper's April 7 article, "Thinking Strategically" (to read that story online, go to epcan.com/story/2021/04/07/news/thinking-strategically-city-begins-work-on-a-2022-24-strategic-plan/9618.html). Blankenship estimated that the Water Master Plan will be ready for release in October. It will provide a more complete picture of the water situation.

Blankenship also mentioned a new project that would increase how many new homes Fountain can service.

"We've initiated the process to build a water transmission line from our southwest water tank into the southern part of our water distribution system, and that will give us additional capacity for the system up to probably about another 500 taps," Blankenship said. "We expect it to be completed in two years. We're still waiting on the final approval of the funding for it."

Roy Heald had similarly good news about the Security Water and Sanitation District.

"The drought has not had a significant effect on us yet," Heald said. "We've got ample storage in Pueblo Reservoir, we've got a diverse water portfolio of raw water, and we've got sufficient delivery systems to deliver that water to Security and on to our customers."

"We're completely surrounded by other entities, so we can't grow outward," Heald said. "There is some in-filling that can be done, but we think we have sufficient water resources to accommodate that in-filling. We're talking to a few developers currently about some projects that may happen at some point in the future, but there are no firm plans on any of those developments. We certainly have not curtailed or given anybody an indication that we would not approve a development because of a lack of water."

Recent rainfall has helped Security, but Heald said it's too early to say whether that sets a pattern.

"Through May, our water use or the amount of water that we sold to our customers was down, I believe, 15 percent from the average of the past three years... but it just depends," Heald said. "When you hear people talk about normal – normal weather conditions or normal water use or normal weather patterns or whatever – there's no such thing as 'normal.' You can look at averages, but just because we had below-average use and above-average precipitation in May doesn't mean anything when you look at the rest of the year. ... It's our goal to be prepared for anything and to have a diverse portfolio on supplies and be able to accommodate whatever customers need."

Heald freely admitted that much of the credit for Security's diverse portfolio goes to past planners.

"The district was formed in 1954, and we've always had farsighted leadership and boards that participated in the Fountain Valley [Authority] and the Southern Delivery [System]," he said. "There has been a cost to those projects, but we're very thankful that we have that water now."

Heald also explained that even if surrounding entities have a water shortage, it doesn't affect his district.

"We do have a connection with Colorado Springs, and have basically an emergency agreement with them that if we need water they will provide it," he said. "It's more expensive water, so we'd rather not use that water. So, if Colorado Springs had a shortage and could not fulfill that lease, then that could be problematic. ... Otherwise, if surrounding entities were short on water, it really wouldn't have an impact on us. In fact, we always try to help each other. So, if there are ways to help surrounding communities on a short-term basis, we'd be happy to do that."

Heald said that neither Fountain nor Widefield has recently contacted his district seeking short-term help.

Lucas Hale confirmed that Widefield's water supplies are doing well, and said that the drought hasn't created any restrictions yet.

"The district's long-term water supply is in good shape; we currently only use 56 percent of our existing water supplies," Hale said. "At the district, we are always looking to the future of water."

While Hale didn't say whether the Security or Fountain water districts had reached out recently, he confirmed that his district would collaborate if the need arose and it didn't jeopardize existing customers.

In June, it was announced that Widefield Water and Sanitation would provide water for the proposed Corvallis development (formerly known as Singer Ranch), which could result in 1,800 homes eventually. This confused some residents, since Corvallis is within Fountain's city limits. The city previously had annexed the property - located south of Fontaine Boulevard and west of Marksheffel Road - and it juts into land generally considered Widefield.

The Fountain City Council will consider a development plan for Corvallis on July 16.