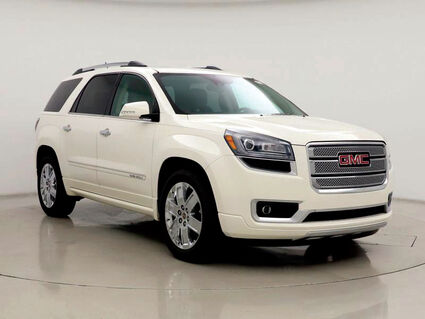 The suspect vehicle looks similar to the one in this stock photo and has temporary tags, according to the Sheriff's Office.

Authorities are searching for a shooting suspect after a road rage incident on Sunday, July 11, left a 13-year-old injured.

El Paso County Sheriff's deputies arrived at both locations. After their preliminary investigation, it was learned the victim's vehicle was traveling south on I-25 along with five people in the vehicle. A white GMC Acadia with a temporary tag heavily taped to the rear of the vehicle, was driving behind them aggressively. As both vehicles approached the South Academy exit, the white GMC Acadia pulled up alongside the victim and threw a beverage can at them, which struck the rear driver's side. The victim pulled off on the ramp and stopped at the red light while the suspect vehicle followed behind them and stopped as well.

At some point an occupant of the white GMC Acadia pulled out a black handgun and fired three shots at the victim's vehicle. One of the rounds went through the rear compartment, through the rear seat and then the round stopped with the tip only exiting the outer portion of the seat. The round struck a 13-year-old child sitting in the rear of the vehicle. The child was transported to a local hospital with non-life-threatening injuries.

The driver of the suspect vehicle is described to be a white male with short dark blonde hair, blue eyes, athletic build, and with a beard. He was seen in the Pueblo West area on Saturday, July 10, and driving up from the Pueblo area to Colorado Springs earlier that Sunday.

The accompanying stock photo of the vehicle involved shows what it looks like.

The suspect is considered armed and dangerous and should not be approached. If seen, contact law enforcement immediately.