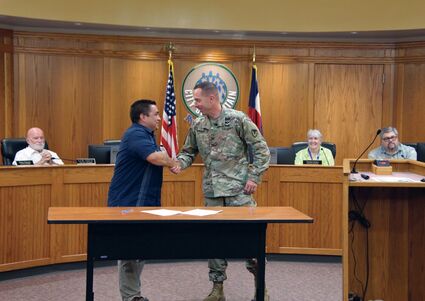 Fountain Mayor Gabe Ortega and Col. Nate Springer of Fort Carson shake hands at City Hall on July 13 after signing an agreement for the city to provide the post with general facility construction services.

The Fountain City Council entered into a major agreement with Fort Carson and also gave tentative approval for two major developments - one of them facing major opposition from neighbors - at the July 13 meeting.

The Intergovernmental Support Agreement (IGSA) between the city and the Army garrison will allow Fountain to provide general facility construction services to the Mountain Post beginning later this year. The move will generate revenue for the city and also alleviate the burden of carrying out construction projects for the Army.

Services may include a variety of construction relate...