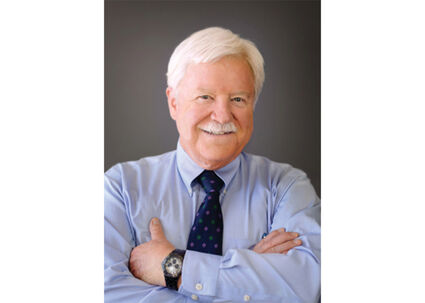 John (Randy) Torbet is stepping down from his position as municipal court judge in Fountain after 49 years.

When Fountain's municipal judge first got to work in 1972, community service wasn't yet a thing and the person for whom Aga Park was named was the mayor.

Now, after 49 years on the job, Municipal Judge John "Randy" Torbet is retiring.

"It's been just an incredible amount of change," Torbet reflected recently.

Fountain City Prosecutor Paul Haller has worked with Torbet for 34 years. He said it would be tough to quantify just how many trials Torbet has presided over during his tenure as judge. In any case, the number is substantial and included traffic, code, animal and minor non traffic issues. Haller said Torbet always managed the court in a thoughtful and intelligent manner, treating all those who appeared respectfully and fairly.

"Fair to say that most folks don't like getting summonsed to court, much less on a Thursday evening," Haller said. "Judge Torbet's calm and kind demeanor assured people that they were respected and would be treated fairly."

Those who worked with Torbet over the years have many fond memories, including plenty of humorous incidents.

"We have seen it all, from animal cases in which the defendant wanted their dog brought in as a witness, to a car accident caused by a snake getting loose in the car - after the driver and his companion captured it - to an individual who didn't understand why he couldn't mow his lawn with no clothes on," Haller said.

Torbet remembers a case where a woman with a strong German accent was in court for a traffic violation and opted to represent herself at the time of trial. Torbet found her guilty, then gave her the opportunity to make a statement before sentencing. It was then that she uttered the less-than-ideal choice of words, "Judge, I have never been violated before."

"I had to swivel around and laugh and try to keep my composure," Torbet recalled.

Doris Fulkerson, who began serving as the court clerk around 1974 and spent many years working with Torbet until she retired, said he was the best person to work for. In fact, she continued to use him as her personal attorney long after her retirement, and she credited Torbet with helping her complete a criminal justice degree.

"I felt like I had known him all my life," she said. "He was just so good, so patient."

Torbet was the epitome of professionalism, never uttering a sharp word to her or saying anything negative about people involved in court cases, Fulkerson said.

"He is very kind and will be truly missed," she said.

Torbet, who also worked full time as an attorney all these years, had a grandfather who was a lawyer in Detroit in the 1920s. Torbet's father also attended law school but got pulled away by war.

Torbet was admitted to the bar in 1968 and got to work as an attorney in Colorado Springs. As an attorney, Torbet said he did his best to help the "average" person. Also, since he picked up Spanish while attending high school in Spain, he enjoys helping out Spanish speakers as much as possible.

In 1972, Fountain's city leaders had decided they wanted the city to have a court of record. Until then, they had a lay judge. Prior to Torbet, this newspaper's co-founder Carl Wiese served in that position. Torbet had represented a defendant on one of Wiese's last cases, and shortly after that Mayor Sigurd Aga and Walt Fortman met with Torbet – over a cup of coffee at the truck stop – to discuss the 28-year-old taking the job.

Since those days, many things have changed. Basic procedural requirements such as requesting a jury trial haven't changed much, but requirements from the legislature about bonds and sentences are quite different now.

"The advent of community service as a sentence option became relevant a few years after I started," Torbet said. "Then of course the city's ordinances change, and so nowadays we do quite a few zoning issues. People have these temporary garages, or are raising chickens not where they're supposed to – things like that."

Most of the serious cases like assaults and domestic violence go to Colorado Springs.

"We don't have as many of those as we used to," Torbet said. "The courts downtown are better equipped to handle those things, with counseling, probation, that sort of thing."

Many of Fountain's cases pertain to traffic and misdemeanors.

"The limit on our sentencing authority is up to one year in jail and up to $1,000 fine," Torbet explained.

Torbet credited Haller with reducing the volume of cases by developing plea arrangements with defendants when appropriate.

Torbet said Fountain was one of the few courts in the state that conducted night court, so it didn't particularly interfere with his day job as an attorney.

There was one time many years ago -before cell phones - when he was involved with a jury trial in El Paso County, and at the close of the day around 5 p.m. the jury was ready to deliberate. The judge asked for the attorneys' phone numbers so they could be contacted if a verdict was reached.

"So I gave the number which I thought was the number of the court in Fountain, which is where I was headed," he said. "I get a call at my office the next morning: 'Where were you last night?' This was the court clerk. And I said, 'Well, I never got a call.' And she said, 'Yeah, we called you, but the number you gave us said the Ute Motel.'"

Torbet is also retiring from his law firm, Torbet Tuft & McConkie, and getting ready to move to Arizona.

"The older I get, the more intolerant I get of winter," he said.

Despite his absence, co-workers say his long tenure and investment into the job and those around him will continue to be felt.

"I am a better attorney due to my association with Judge Torbet," Haller said. "He will be missed, but we all wish him much happiness and good health in his retirement."

City Attorney Troy Johnson said the city will use the existing back-up judge as the interim municipal judge until a permanent selection is made. The City Council will make that appointment.