One of Fountain's own making a difference for fellow veterans 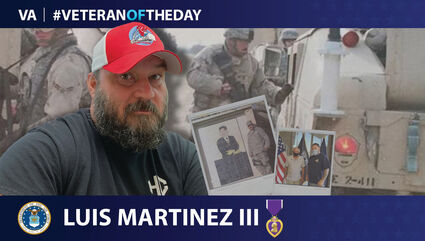 A Fountain native and Air Force veteran currently serving a Texas community has been honored for exceptional service to fellow veterans – including efforts to prevent suicide, unite various veteran organizations, and raise funds for homeless veterans.

Luis Martinez III grew up in the area and graduated from Fountain-Fort Carson High School in 1996.

"I lived in Colorado Springs off and on due to my dad being in the Army," Martinez said. "We lived in Widefield and Security as a kid, and finished in Fountain."

He was a Staff Sergeant (E-5) in the Air Force, and served from 1996-2012. Later, he became a veteran resource coordinator at the Texas Workforce Commission in San Angelo, Texas. He also serves as DAV Chapter 237 Service Officer.

Martinez was featured in the July 2021 issue of the G.I. Jobs magazine for its inaugural Employee Veteran Leadership Awards. The purpose was to highlight "full-time veteran employees who are making meaningful contributions to their organizations, fellow veterans and employees, and their community."

The 15 veterans selected for this issue exhibited "leadership, teamwork, discipline, determination, adaptability, a strong work ethic and a can-do attitude," according to the magazine, and "they advocate for the recruiting, hiring and success of fellow veterans, seek to improve programs and services for veterans, and volunteer their time within the organization and their communities at large."

For the list, G.I Jobs reached out to all 2021 Military Friendly Employers to nominate outstanding veterans in their organizations.

Here is the write-up on Martinez, based on a nomination submitted on his behalf to G.I. Jobs:

"Luis is the definition of an outstanding leader. Every veteran in the city of San Angelo, Texas, and the surrounding small towns knows this man and has his phone number for when they need him. He is the commander of the All Veteran Council and DAV Chapter in San Angelo. He has been a mental health veteran case manager, where he was responsible for stopping several suicides and preventing many others through a battle buddy system. In a divided community, Luis brought several of the veterans organizations together to ensure all veterans in need are taken care of. He orchestrated a team of veterans to coordinate the city Veterans Day parade and hold fundraisers for homeless veterans. Luis is the most selfless and dedicated man to serving his fellow veterans that I have ever met, and I have been working in the veteran field a long time."

On Nov. 14, 2020, Martinez was featured as the U.S. Department of Veterans Affairs "Veteran of the Day."

According to the VA's article, Martinez deployed overseas numerous times in support of Operation Iraqi Freedom and Operation Enduring Freedom, as well as other international assignments. 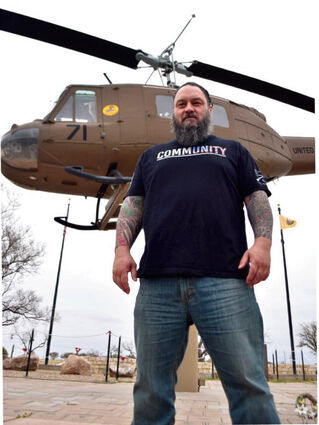 Luis Martinez III, a Fountain native and Air Force veteran, has been recognized for his many efforts to help fellow veterans.

"During his service, Martinez endured several injuries," the article states. "In 2004, he was stabbed in the abdomen at a vehicle checkpoint; in 2008, he was shot in the left shoulder in convoy; a year later, his vehicle was hit with a blast caused by an improvised explosive device (IED). During his service, Martinez received several awards, including three Purple Hearts, an Army Commendation Medal and an Air Force Combat Action Medal."

In 2017, Martinez completed his higher education, graduating from Howard College and Angelo State University with a bachelor's degree in social work.

The full VA article can be found at https://blogs.va.gov/VAntage/80861/veteranoftheday-air-force-veteran-luis-martinez-iii/

To nominate a veteran for this honor, visit https://blogs.va.gov/VAntage/28415/contribute-veteran-day/

Martinez said he loved living in Fountain and he still has family in the area.