Local school districts have been advertising for bus drivers with banners on buses parked around the community, like this one on Hwy. 85-87.

Organizations throughout the Fountain Valley have reported struggling to hire new employees. James Flowers, president of the board of directors for the Fountain Valley Chamber of Commerce, confirmed that he has received reports of hiring issues on the city, state and national level.

"A lot of people are having problems with service positions and office positions, having a hard time keeping them filled," Flowers said. "I would say it's unusual, but I think it's a reflection of recovering from COVID."

Specifically, high unemployment benefits and people preferring certain positions seem to be contributing to this gap.

"From what I've gotten briefed on and what I've read, a lot of people are still taking full advantage of the unemployment benefits, and once those stopped, they actually started going back to work," Flowers explained. "A lot of them actually decided to go into business for themselves or decided to work from home. That's a big result, I believe, of the low numbers for employment."

James Sanchez, owner of Western Omelette 2 (311 N. Santa Fe Ave. in Fountain) said he has struggled to maintain employees since the restaurant's full reopening in May.

"I've had staff issues," he said with a laugh. "We're getting it back together slowly, we've had some people start to look for jobs, but before it was like, 'Where are we going?' But lately, it's been going up. We've gotten a few more applications and are starting to fill up our positions, but it's just happened in the last week."

Sanchez cited several cases where his employees had quit saying they were getting better paying jobs elsewhere. He's taken that in stride, viewing it as the inevitable downside of running a small business.

"I'm just a local guy, I can't compete with McDonald's or whatever and start paying people $15-16 an hour," he explained.

However, Sanchez was hopeful that with recent staff additions, the restaurant will reach a new level.

"If I get good help, it's going to be better for us because then we'll be able to open up more – instead of me being here seven days a week, 12 hours a day," he said.

Despite his optimism, Sanchez was unable to open the restaurant on Tuesday, Aug. 10, "due to lack of employees."

"We have had some issues keeping employees and finding employees to hire," Holmes said. "We've had several weeks where we've had to close half days because we just don't have the staff to stay open all day. I honestly don't understand why we're having these issues for the last year or so, but didn't in previous years."

At the time she was interviewed on July 30, Holmes had hired a new full-time staffer the day before.

"The last person we had that quit, decided to quit to do a job working from home, so hopefully this employee will work out for us," she said.

While Holmes could not think of any nearby businesses that she knew were having the same problem, she had indications that her situation wasn't unusual.

"I've had several customers come through and complain about the same thing," Holmes said. "I'm just not sure what companies they work for."

Samantha Briggs, director of communication for Widefield School District 3 (WSD3), confirmed that WSD3 is currently having a hard time with hiring.

"School districts across Colorado and the country are struggling to fill positions," Briggs explained. "It has been more difficult than in years past due to the pandemic. We are still looking to hire bus drivers, substitutes, and educational assistants (paraprofessionals)."

Although Briggs cited the pandemic making it harder to hire people, she couldn't name any specific reasons for the current trend.

"We are not sure why these positions are hard to fill," she said. "The unemployment rate in the county isn't extremely high, but we know there are many unemployed people who would likely be great candidates for these positions. We encourage them to apply online at wsd3.org."

Briggs said that WSD3 has responded to this problem by increasing their advertising, both online and in physical location, to try and attract "qualified staff."

Christy McGee with Fountain-Fort Carson School District 8 (FFC8) confirmed that the district is having a difficult time hiring bus drivers, but couldn't say whether that is an unusual problem or whether the need was greater than in the past. 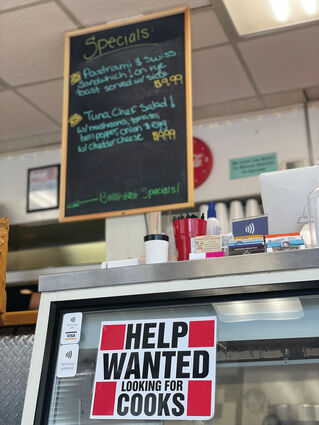 Western Omelette 2 in Fountain has been busy since fully reopening a few months ago, but owner James Sanchez is having trouble finding enough employees to staff it.

"The district is struggling to fill some positions – for example, bus drivers and special education teachers," McGee said. "We can't speak exactly to why this might be, but we have heard competition from private industries and cost of housing (in the region and the state) may play a part in hiring struggles. We can say the shortage of bus drivers seems to be a trend across all districts in southern Colorado."

McGee explained that FFC8 was combating the problem with a variety of recruiting strategies it had used in the past, including networking at Fort Carson hiring fair and college educator recruitment fairs, posting job openings on FFC8 social media channels and third-party sites like Monster and using connections at the local, state and national level to promote particular jobs they need filled. McGee also said FFC8 is "enhancing the opportunities for classified employees to become teachers," which presumably means people already working for FFC8 as technicians or other classified roles can apply to train as teachers or work as substitutes. To find out more about jobs at FFC8, go to ffc8.org/careers.