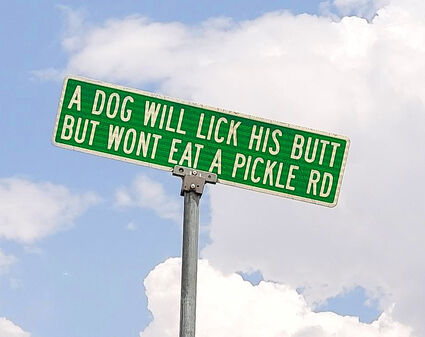 This humorous street sign for a private drive off C&S Road in Fountain has been missing since Aug. 10.

"A Dog Will Lick His Butt But Won't Eat a Pickle Road" in Fountain is a real street name, but now the infamous street marker has gone missing.

The sign, which over the years has created a lot of laughs for homeowner Rick Driver and his family, along with countless passersby, apparently was stolen Tuesday, Aug. 10, in broad daylight. Driver just wants his sign back.

"I would love for someone to return it," he said. "It's like stealing the Mona Lisa. You're gonna show somebody. Somebody knows."

Driver says a neighbor left home at 10 a.m. and recalls everything being in its place, but upon returning at 3 p.m. noticed that the sign was missing. And it wasn't just the sign; most of the pole was gone, having been cut off near the base.

Driver said the pole was secured in concrete and properly welded. He suspects whoever took it may have used a pickup truck or other large vehicle due to the length of the pole that was taken.

The sign has been a fixture at Driver's property since 2006. Initially he installed it because a homeowner's association insisted there be a name for this private drive – located off C&S Road near Fellowship of the Rockies – and he figured it may as well be a funny one.

"It's been nothing but fun," Driver said.

People have stopped to take pictures with the sign, and it's been featured on numerous national TV shows and websites, from Jay Leno and David Letterman to Larry the Cable Guy. In 2015, website Buzzfeed included it in a sign contest.

"I had won the coolest street sign on the planet," Driver said. 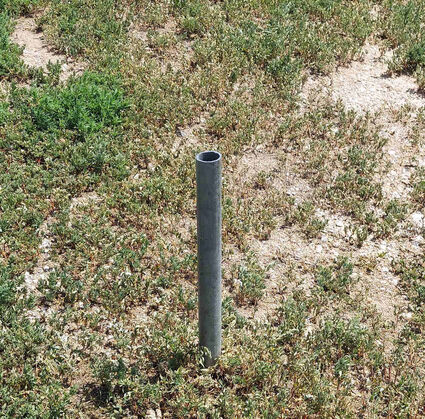 This is all that's left of the pole after someone stole the street sign.

Several years ago, geocachers began hiding objects in a bush near the sign. Driver recalls surprising a woman who was looking under the bush for the "treasure," and at the time he didn't have a clue what geocaching was.

The sign was stolen one other time, about three years after its installation. Fountain police looked into it, and it turns out it was a prank by a relative. A few years ago, the sign was hit by a vehicle and was damaged beyond repair. However, the sign was always replaced, and Driver made it more secure over the years.

Driver does not believe this incident is a joke, and he has filed a police report. Anyone with information about the missing sign should call the Fountain Police Department at (719) 390-5555.