A tale of puppy love

Oh my word!! Repeat after me: "Alice is a glutton for punishment."

Did you say it? Now just wish me well and know I am losing my mind more quickly than normal! You see, we have big dumb baby dog, Atticus, still crazy busy and not trustworthy yet. I think he is beginning to show signs of maturing and mellowing a tiny bit and maybe I could entertain some fine ladies and hostess a tea. You may remember how I wrote about doing it once. Well, I did this wonderful tea; we used my grandmother's teacups and all the beautiful dishes with wonderful bites to eat and I had gifts for all the queens who came. I do believe all had a nice time... I, however, was a complete mess!

A few days before the party someone told me they had a Basset Hound puppy that needed to have a home. They were not giving him away, but he was way cheaper than all the others we had tried to find when we ended up with Atticus two years ago. They showed me a picture of this 8-week-old Basset baby... I had to have him! So, to Old Man I went with the picture and said, "Look!" His first reaction (let's just say here once again, he is a stone-faced kind of guy, not a lot of goo or softness in him), he lets out an "AWWWE!" and says, "Whose is that?" and of course I said that he could be ours ... He told me we didn't need another dog and he was so right, but these droopy eyes and saggy ears, so I showed him the picture again. He asked, "How much?" I told him, and his eyebrows raised up and I swear I saw a twinkle in his eye... then he shook his head and repeated that we did not need another dog... So, he went outside to do something. I sent him a text; it was a picture of that puppy... I knew he was breaking... Long story shorter, we have a baby Basset named Baxter.

Well, the owners were leaving state on a vacation and I could not wait to pick up puppy until after my queen's tea; we had to get him before... potty training and running and cleaning carpet and Atticus rough-housing fears were ruling my every minute. Get ready to host a tea party... right! My daughter helped so much, but Old Man was warned he had to leave for the party and go someplace else. So, we did not do all the things we intended as far as decorating and some foods, but there were a lot of leftovers so everyone had enough. Puppy was passed around and loved on by our guests. I'm going to tell you right now, that the ladies that came to my house were some great smelling gals; that puppy smelled so good after all his cuddles. He was a successful little heart breaker at the tea.

The next day did not slow down, we cleaned up messes from the tea and messes from the puppy and tons of Atticus hair. You see, it turns out that Atticus is so gentle and sweet with Baxter that we were amazed! So, Baxter bites Atticus relentlessly and pulls out clumps of hair during play, and play is nonstop! Atticus will sometimes, in an attempt to get Baxter out his piranha attack mode, grab him by the long ear and pull him off. I have to say here, too, that Baxter bites Atticus' lip and pulls with his little body and all his might. Atticus has to be able to defend himself; we remain diligently observant to make sure they do not get too aggressive with one another but they just GO! Then when they stop Baxter is looking for a pee location and within seconds relieves himself... We sprint with carpet cleaner and paper towels in hand. The whole time we are running to the puppy he is looking at us while he whizzes on the rug, and when he is done runs towards us like it's a game... it is, I guess. It takes him milli-seconds to empty his bladder and mega-minutes for my big old butt to get moving. I never make it in time. But man, he is so cute!! 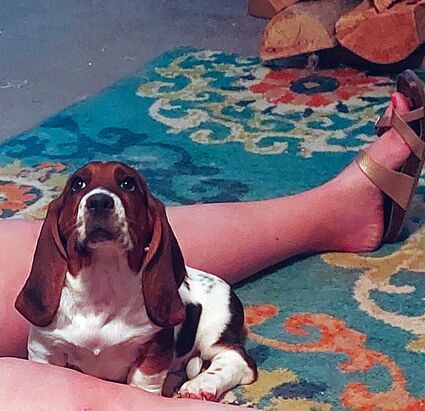 There is no moral of the story here, there is no cute little closing statement – I am losing my mind. What was I thinking, slow down in retirement? Nahhhh! Not me... I am madly in love with this pup. I am not a supporter of dog "breeding;" however we love the character of a Basset and the laid-back attitude when they are adults. We had looked high and low in shelters to find one so many times, they are just a rare kind of dog here in Colorado. We named him after the first Basset we fell in love with, my grandpa's dog, Baxter the Basset Hound. Later we had one named "Ambitious'' and he was a real love! We had him for 13 glorious years. Now we have this little guy... and Atticus, Annie, Colby the parrot, and Zoe the cat who will never speak to us again after this insult.

I guess you could say we have pets from A to Z.