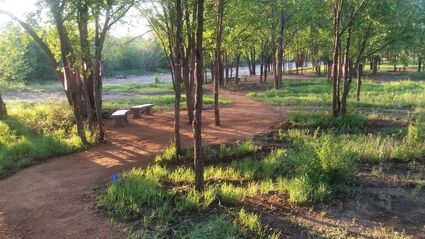 Trails within Gateway Prayer Garden allow people to pray as they walk through natural settings, or sit and pray on benches along the way.

It began with a prayer over 15 years ago, but started to become a reality five years ago. With a lot of work and help, Gateway Prayer Garden (8035 Bandley Drive in Fountain) has slowly taken shape, and this weekend its welcome center will finally be open.

The center will the site of a Big Tent Revival meeting, 4-8 p.m., Aug. 20-21. Pastor John Bornschein of Calvary Fellowship Fountain Valley will give a prayer on Aug. 20, followed by a message from Jeff Anderson, senior faith adviser to Congressman Doug Lamborn. Representatives from several local churches and organizations will be there to celebrate this final step in opening Gateway Prayer Garden to the public. Prayer trails have been open for some time, but visits have been hampered by not having an operating welcome center. Organizers hope that this opening will raise their profile in a big way.

"We've been one of the best kept secrets in El Paso County," Gateway's Director Mark Spengler said. "But I think that's about to change."

The meeting will also commemorate the 100th anniversary of what is believed to have been a revival that happened on Fountain's Main Street. A 1921 photograph housed in the Fountain Valley Museum shows people gathered on Main Street underneath a large tent, with a speaker talking to the crowd. According to Elaine McKay, the museum's president, it's not known what happened at this event. (See photo below.)

"We think it's a [picture of a revival], but we don't have anything that specifically says that," McKay said.

McKay further explained that it was common in the early 20th century for carnivals or organizations like Woodmen of the World to visit towns, giving presentations in the town's central area. Therefore, the Main Street meeting could have been several different things. One reason to believe it was a revival is that the picture shows the bank and opera house in the background, buildings that were sometimes used for church events.

The grand opening of the Gateway Prayer Garden Welcome Center marks a big milestone in a project that has been going on since 2015, rooted in something that happened in 2005. As Gateway's organizers recall, the project really began when Max Greiner Jr., a sculptor living in Texas, was traveling through Colorado in 2005. Greiner was driving along I-25 when he felt led to stop and pray over a section of land adjacent to the highway. Greiner, who was involved in plans to build a prayer garden in Kerrville, Texas, specifically felt he should pray for a prayer garden to go on this property.

In 2016, the same year that Greiner's Coming King Sculpture Prayer Garden was completed, mutual connections helped him discover that Ted Beckett owned the Colorado property that he had prayed over. Beckett and his wife, Audrey, had extensive real estate experience and had built prayer walks and gardens in various places. At that time, the Becketts were planning to donate that 22 acres of land to a charitable cause rather than sell it. Spengler became involved in the project because he had met Beckett in 2015 during a prayer meeting at Glen Eyrie, a castle owned by the Navigators and used for ministry events.

"A group of us were just meeting at Glen Eyrie for prayer, to pray for the city once a month," Spengler explained. "One time, in January 2015, Ted Beckett just showed up – to this day I have no idea how he heard about it... We got to become friends."

With the Becketts already planning to use the land for charitable purposes, the plans for Gateway seemed simple. Plans were drawn up for a prayer garden with trails, benches, and other features set in a cross formation, similar to the Kerrville garden. A large open cross was installed on the site in May 2017 to inaugurate it. 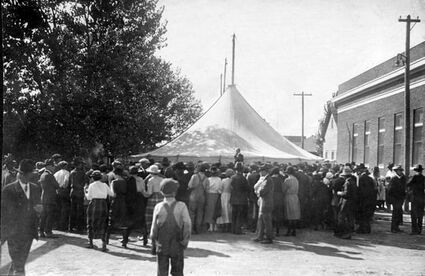 Courtesy of The Fountain Valley Museum

This 1921 photo, on display at the Fountain Valley Museum, is believed by some to be a revival meeting taking place on Fountain's Main Street.

However, things quickly became complicated. In 2018, the federal government told Gateway that hydraulic studies showed the land was inside Fountain Creek's floodway zone, making it unfit for construction. During the same period, Gateway learned that the land was listed as regional commercial property, meaning a religious site could not be built on it. During these two years of indecision, volunteers worked on clearing the property's trails, and generally praying and hoping that the obstacles would be removed. Fountain's City Council approved an amendment in April 2020 that rezoned the area as village center land, which can be used for religious purposes. Then in May 2020, the Federal Emergency Management Agency (FEMA) sent a letter to Gateway showing that the original hydraulic studies were inaccurate and the area had been rezoned accordingly. On May 31, 2020, a ceremony was held to commemorate a new prayer circle for military personnel and veterans, and celebrate the removal of these two obstacles. COVID-19 forced Gateway to pause some of its plans, but organizers were able to start installing utilities for their welcome center building in June 2021.Ted Beckett passed away on Oct. 10, 2020, having lived to see all Gateway's major obstacles cleared.

"He once said, 'You know, if we never do more than the prayer trails, I'll be happy,'" Spengler recalled.

To find out more about Gateway's events, visit gatewayprayergarden.org or facebook.com/GatewayPrayerGarden.