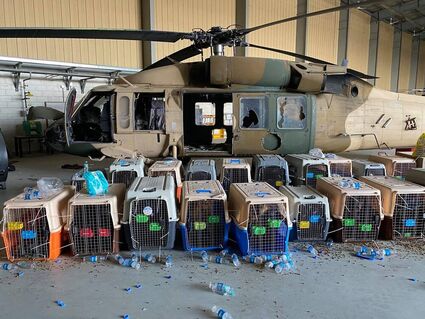 This photo provided by Veteran Sheepdogs of America purportedly shows working dogs in crates at the Kabul airport a few days ago.

Veteran Sheepdogs of America is responding to common questions regarding the 51 contracted working dogs in Kabul, Afghanistan. Their responses are as of Wednesday evening.

1. What is the relationship with Charlotte Maxwell-Jones and Kabul Small Animal Rescue?

"We were contacted on Saturday regarding the situation on the ground at Hamid Karzai International Airport and informed of the dogs under the care of Charlotte and the Kabul Small Animal Rescue. Tommy Amenta connected us directly with Charlotte and we spoke about the dogs and received documentation of each of the 51 working dogs. The Kabul Animal Rescue has not been in custody of the dogs since Monday - which is where our organization came in. (Additional source: Washington Examiner)

Charlotte was in contact with Joshua Hosler, our President and Chairman, when she left Hamid Karzai International Airport on Monday. She was aware of our mission moving forward and gave permission for us to take the lead on this evacuation.

Disinformation that has spread online regarding this situation has put the lives of the dogs and our friends on the ground at risk. We urge restraint to the media - and others online - when spreading secondhand information online. As much as we appreciate the press taking an interest in this story and bringing in donations, we would rather a story be put on hold than to risk lives."

2. Clarify the difference between these 51 "working dogs" and other dogs that are currently wandering the airport and surrounding area in Kabul.

"There are rumored to be upwards of 100-400 "other" dogs around Hamid Karzai International Airport. We are not aware if these are rescue, other contracted working dogs, etc. We have no documentation on them. The 51 dogs we are working to evacuate do have their documentation and are currently crated and in a specific location at the airport. We have eyes on these dogs and have confirmed their safety as recently as today.

Since yesterday, we have also captured 83 of these dogs, suspected to be abandoned and rescue dogs, and are doing all we can to bring them with us back on the plane as well."

3. The Pentagon has refuted the allegation that American working dogs were left behind. Can you respond?

"Technically, they are correct, in that dogs owned by the American government were indeed taken with our troops during the planned evacuation. Unfortunately, they're intentionally being clever with their words. The 51 working dogs we have in our custody were those that were contracted, meaning that they were trained and owned by the Afghan military or private contractors and utilized in U.S. Military operations.

These dogs were at Hamid Karzai International Airport (then under the care of Kabul Small Animal Rescue) on Monday and were denied entry on final departing U.S. Military flights."

4. You've mentioned 170 individuals who you will also be working to evacuate?

"This number is in flex and dependent upon who we can get to the airport and who we cannot. We promise we're doing all that we can and we hope this story has a happy ending."

5. What organizations or governmental departments are you currently in contact with regarding this mission?

"The U.S. State Department, the German Government, the Quatar Government (which is handling flight logistics at the airport), U.S. officials at Ramstein Air Base, Members of the U.S. House of Representatives, K9 Mission Rescue, and others we cannot disclose at this time."

6. Why can you not share more information regarding the flight and plan at this time?

"Lives are at risk. Simple as that. We promise full transparency and disclosure after the mission is complete. We're a registered 501(c)3 non-profit and we're not going anywhere. All we can promise is that money has been paid and plans are in motion, anything else would jeopardize the lives of those involved in Afghanistan."

7. What happens if this doesn't happen?

"If things fall through - funding specifically for this mission will be returned to donors. Otherwise, we will continue to work towards getting our allies - humans and dogs - to safety. This is the first of hopefully many missions we will assist with in Afghanistan to bring our allies (both two and four-legged) to safety."

"The situation on the ground in Kabul is becoming more dangerous by the hour," said Joshua Hosler, President and Chairman of VSA. "It's excruciating for us to not be able to share the details of the mission moving forward, but doing so could endanger the lives of our partners on the ground and the dogs we're doing everything we can to save."

"By all means, hold us accountable," said Anthony Archer, Vice President of the VSA. "We are legitimate non-profit organization that is led by veterans. Our names are public, our organization is public, and we'll do everything we can to verify our work once those dogs - and individuals - leave the tarmac and we can guarantee their safety."

The Veteran Sheepdogs of America will continue to update individuals via email and social media as information can be disclosed.

"The response has been overwhelming," said Joshua Hosler, president and chairman of VSA. "We are still fighting the clock to bring these dogs home and we wouldn't have a chance if it wasn't for the outpouring of support we've received thus far."

Following the posting of a now-viral video on the VSA TikTok account, news of this effort has now spread to national news, including TMZ. Tweets from the VSA Twitter account on the topic are also quickly gaining steam, with some gaining upwards of 20,000+ likes and 5,000+ retweets.

However, the fast pace of ever-changing events has led to some skepticism as people view pleas for donations. Some have demanded to see more recent photos of the dogs for "proof of life." Hosler, in an update video posted online Tuesday, said VSA cannot release current photos of people and dogs involved because "the Taliban is paying attention to social media."

The money is going directly to the plane company and costs for various logistical necessities such as mandatory 30-day quarantine, he said.

Despite several plans falling through, VSA continues to work with various contacts to try to bring the dogs out of Kabul.

"We have not slept in like three or four days," he said.

Currently, the 51 dogs are being cared for by an on-the-ground contractor and a refugee Afghan family that VSA is also looking to assist, VSA reports.

"These dogs would have been left to die without the Afghan allies we have assisting us on the ground in Kabul," said Anthony Archer, vice president of the VSA. "The fact that they remain committed to helping these canines get home - even after the last of American military personnel has departed - illustrates the commitment and loyalty these amazing people have. We cannot forget that."

In addition to the 51 working canines (contract working dogs, not military working dogs), VSA is working to evacuate 170 Americans, Christians, Jews, and interpreters in Kabul, many of whom are undoubtedly on Taliban "kill lists" for their defiance of their regime and previous work with the United States Armed Forces. No seat will be taken by a canine.

"While the dogs have certainly caught the attention of tens of thousands, we can't forget the 170 humans we hope to bring with us on this airplane," said Hosler. "These are 170 people who may not be alive unless we get the wheels up. This is real - the threat is real - and we can save their lives."

Funds raised by VSA will be utilized for care and transportation of the canines and refugees. Currently, the organization has already chartered an airplane that is on the ground in Kabul - with a cost of $1.67 million. Currently, VSA has raised approximately $1.4 million.