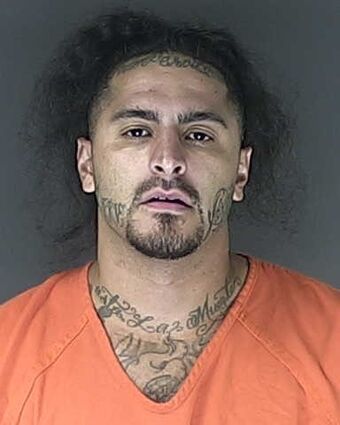 A 33-year-old man was arrested Wednesday evening after he allegedly kidnapped a woman at gunpoint from the Sonic on Main Street in Security, as well as additional assault and getting a small child involved in the ordeal at other locations.

The victim was located after several hours, but officials said they could not provide an exact update on her condition as of 1:20 p.m. Thursday.

According to the El Paso County Sheriff's Office (EPSO), at approximately 4:57 p.m. Wednesday, multiple people called 911 to report a woman being dragged out of a black SUV by a man with a gun at a drive-thru restaurant in the 300 block of Main Street - identified by witnesses as Sonic. There were multiple reports of shots being fired by the man as the woman was dragged into a white sedan. The sedan left the area traveling north on Hwy. 85/87. The black SUV also left the area driven by another female. Deputies from patrol and SWAT responded and began checking the area.

At approximately 5:05, multiple callers reported a female with a bloody face running from a white vehicle near South Academy and I-25. Multiple patrol units from EPSO, Pikes Peak Community College and Fountain Police Department (FPD) responded to the area. An FPD drone was requested to search the fields in the area. The female was located hours later.

At approximately 6:23, a caller from the 1400 block of Maxwell Street called 911 to report the suspect, Steven Vigil, 33, was just at their house menacing them with a gun and threatening to come back to kill them. He then left in a white sedan.

At approximately 7:15, with the help of the Regional Fugitives Unit and SWAT, the suspect vehicle was located in the 1300 block of Ranier Drive. The suspect came out of the house, assaulting another female and forcing her to the car. SWAT members moved in to conduct a vehicle block to prevent another apparent kidnapping. Vigil made it into the driver seat as the female fled on foot. Vigil drove away from the area and after a short pursuit, deputies were able to prevent him from continuing. Vigil then reached into the backseat and pulled a child into his lap.

Vigil obeyed all commands, and the child was safely removed with no injuries. Vigil was booked in the El Paso County Jail on the following charges:

At this time there is no reason to believe there is any further threat to the community, an EPSO representative said.