Some members of the Dirty Face Gang pose for a photo after a competition this summer.

If gunfight scenes from old Westerns bring a smile to your face, then a new fast draw club in El Paso County might be for you.

The club is called the Dirty Face Gang, and participants take on Western-style aliases such as Ranger or Dirty Rotten – some of that may depend on the participant's bent toward "good guy" or "bad guy."

In this case, Dirty Rotten is the alias of Rick Driver, the Fountain man who took on the challenge of building a fast draw shooting range in order for locals to have a place to practice. Driver, his sons Lucas (aka Ranger) and Cody (aka Hex), and other family members are all relatively new to the sport, but it's quickly become a way of life.

"We started this because there was nothing to do during COVID," Driver said.

They found out about fast draw after seeing a bumper sticker about it. They tried a few events in other parts of Colorado and eventually went to the state championship, but there was no place locally for them to have real practices and events.

"So I built a saloon," Driver said.

The "saloon" is the shooting range, and it's located in Ellicott just east of Colorado Springs. At this time, there are about 15 people involved in Dirty Face Gang. They hope others will learn of the club and give it a try.

Lucas, who began at age 12, is one of a few teens currently involved. Lucas became a Range Master to run the range and has been in the Master Gunfighter class shooting with the adults. He hopes others his age will join.

Kids can start participating at age 8, and there are special rules and training involved for them to get going. They have to do a two-handed draw and won't progress to a one-handed style until later. Once they reach a certain level, they can match up against adults – all depending on their skill level.

Other tenets of the organization are promotion of the "cowboy way," friendly competition and family fun. Quite a few women and children participate.

Dirty Face Gang is one of only two clubs in Colorado affiliated with the Cowboy Fast Draw Association (CFDA). CFDA affiliation means they have to meet certain standards, for safety in particular. Club members who do well can progress to state championships, territorial championships and other contests around the United States.

Some of the longtime organizers of the San Juan Shootists, who hosted the Colorado State Championships in Pagosa Springs, have decided to retire, so Driver and the Dirty Face Gang are stepping up to host next year.

According to a history of fast draw by CFDA's Cal Eilrich, aka Quick Cal, the modern interest in fast draw has its roots in the 1950s-era Westerns. TV shows like Gunsmoke and Bonanza, as well as countless movies, made the cowboy fast draw an iconic activity imitated by kids both young and old.

"In 1903, a 12-minute film was made called The Great Train Robbery," Eilrich's history states. "This milestone achievement in film making was based on a true train robbery carried out by Butch Cassidy and the 'Hole in the Wall Gang' on Aug. 29, 1900, only three years prior."

Eilrich continues that an actual old Western term, "quick on the draw," actually meant hot-headed and quick to draw a gun – not a statement of talent. But the imagery made for good entertainment, and fast draw continued to evolve as the gunslinger persona in popular shows and movies became everyday figures in viewers' lives.

According to Eilrich's history, "Dee Woolem, a native Oklahoman, was employed by Knott's Berry Farm in Anaheim, California, to perform as a stuntman. He staged train robberies and entertained millions of visitors of the park for a number of years. In 1954, with the help of technicians at the park, he created the very first fast draw timer. That year he conducted the first known timed fast draw competition. There were 12 competitors, and he billed it as the National Fast Draw Championship; first place was a chicken dinner. ... Dee rightfully has earned the title of 'The Father of Fast Draw.'"

Interest in the Old West grew dramatically in the 1950s and '60s. According to Eilrich, Colt Firearms hired George Virgines, a well-known fast draw artist and sport organizer from the Chicago area to write a brochure on 'How to Form a Fast Draw Club,' and there were Fast Draw clubs forming all over the country.

However, there was not much continuity between them and they had their own rules. Over a number of years, there were some attempts at establishing organizations to streamline the various clubs and their rules, with mixed success, but individual clubs continued to pop up around the country.

Cowboy Fast Draw, LLC, was founded in Deadwood, South Dakota, in 2002. It grew to the largest Fast Draw organization in the history of the sport.

Lucas Driver, for instance, completed all the necessary trainings to become certified to run the shooting range.

"One of our primary goals is to educate as many people as possible in the safe and proper use of firearms," the CDFA website states. "Because our sport can be conducted at almost any location due to the wax bullets that we use and the backstops our clubs construct, our events are held in many public venues. We consider ourselves ambassadors of the Cowboy Way and Gun Safety to the public who are spectators at our events."

Inspired by the Colt Peacemaker released in 1873, Cowboy Fast Draw uses 1800s-style single-action revolvers and center fire cartridges. The only ammunition permitted is .45 Colt wax bullets. Holsters are pre-1900 style Mexican Loop or Slim Jim and are worn on the side of the leg.

Targets are 24-inch round discs with lights and sensors that detect hits, which are displayed on digital timers.

Contests are elimination style. Western-style clothing and aliases are a big part of it. Participants will see names like "Sassy Pants" and "The Undertaker," and they'll need to pick one that hasn't been claimed yet. 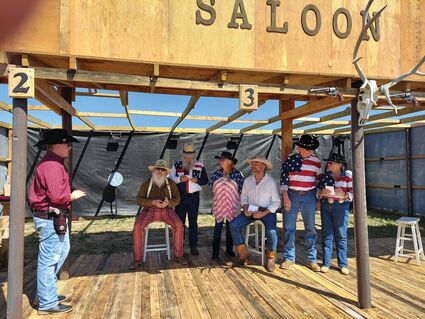 Lucas Driver, left, hands out awards to members of the San Juan Shootists after a recent competition at the new fast draw club in Ellicott.

Dirty Face Gang hopes to hold the State Championship and the South West Territorial Four Corners Championship at its club next summer. Because the club is so new, Driver would appreciate all the help he can get in developing the membership and improving the facility before that happens.

Experience with firearms is not required. New members will be paired up with a mentor to learn all the techniques and safety rules. A hand judge stands directly behind shooters during competition to ensure proper technique, Driver explained.

"It's in a controlled environment, and everybody's looking out for everybody else," he said.

Dirty Face Gang hosts an official club shoot once a month, with other practices throughout the month. Those interested in trying it out can do so without any commitment, Driver said.