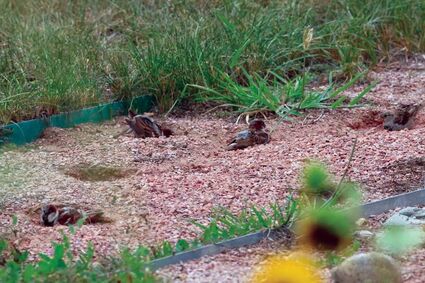 So, a few weeks ago, I was in my yard taking pictures of hummingbirds. I was leaning against my fence and occasionally looking into some sunflowers in my neighbor's yard to see if any Gold Finches were around. Next to the sunflowers, there is a bush that 30-40 Sparrows use as cover. The Sparrows have gotten pretty used to me, and most of the time, they just go about their routine. This day's routine seemed a bit different!

There is a little dirt path a few feet away from the Sparrows' cover. They will come out and peck at the path, eating small pieces of gravel for roughage. Birds have no teeth, so they will often eat very small pieces of gravel to help grind up the food in their digestive system. This isn't done by all birds, but most small birds do it because the food is too big to digest. I will also see them come out on this path during mating season to do little dances to attract a mate.

When babies are fledging, I will see them on the path flapping around for Mom or Dad to bring them food. This day's activities were different, much more frantic, and seemed chaotic. There were at least 10-15 birds at a time flopping all over the path. They were getting so aggressive on the path that they were making holes in the ground. Some of these holes were getting so deep, I couldn't even see the Sparrows anymore. This wasn't anything I had ever seen, so I decided to snap a couple images. These are a few of the images I took that day. You can see a small part of the Sparrows in some of the holes but some are so deep, you can't even see the Sparrow.

Of course, I started to research this behavior. It turns out they were just taking a dust bath. I've seen and heard of birds taking dust baths, but never so aggressively that it dug holes in the ground! By the time they were done, there must have been 40 holes on that path! Many birds take dirt baths. They are also called dust baths, dusting or sand baths. This behavior is a regular part of many birds' preening and plumage maintenance.

Dirt baths take care of several preening needs. Feathers need to be in top condition. Most birds molt once or twice a year. Molting is when a bird loses its feathers and then grows in new ones. The feathers do not fall out all at one time; this process can take a couple of weeks. It's not uncommon to see birds with no head feathers. However, when birds molt wing feathers and tail feathers, they tend to be less active. This is actually the time of year many birds are molting, so you may have seen a Blue Jay or a Grackle with no head feathers. Molting will give a bird a fresh new set of feathers, but doesn't do much for daily maintenance. A birds' feathers must be in tip top shape for flying.

The two main reasons for dirt baths are oily or matted feathers, and small mites and parasites. A bird must get very aggressive in the dirt to get dust into every single feather. The dust will get into the feathers and absorb grease and oil that start to build up, matting the feathers down. Other substances can be washed out of the feathers with dust that can't even be removed with water (such as tree sap). Just a small amount of tree sap on a bird's wing can make it impossible to fly. A good dirt bath can get it right out. I'm sure we have all used a little dirt to help get something sticky off our hands. A dust bath will also help smother or minimize lice, feather mites and other parasites.

Dusting can be seen at anywhere or any time. Whenever a bird feels the need, they will just get in the dust and thrash about. Many different birds have been observed dusting, but it is most common in arid habitats. It turns out that Sparrows are one of the more common birds to observe doing this. I think what most took me by surprise was the size of the holes they made. I hope my neighbor doesn't trip in any of them! 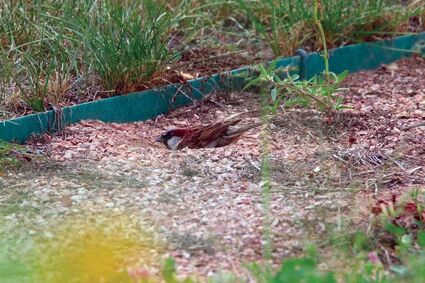 I've known about molting and dirt baths, but I did learn something else interesting in my research: another type of feather maintenance called "anting". Some birds who are anting will sit on ant piles or even roll around on insects. The insects (usually ants) secrete liquids which can have chemicals in them such as formic acid. This liquid can act as an insecticide, mutinied, fungicide or a bactericide. This is a behavior I have not seen yet, or at least I didn't know I was seeing it. You know I'll be watching for it now.

Feel free to message me on Facebook, email or give me a call if you observe behavior in birds that you have never seen. If I don't know about it, we can learn together! Happy birding!