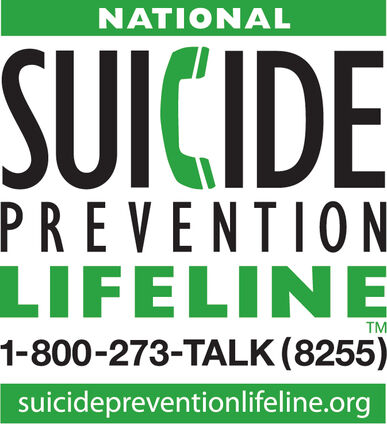 The Lifeline suggests several steps in understanding the topic:

Hope Can Happen – Suicide is not inevitable for anyone. By starting the conversation, providing support, and directing help to those who need it, we can prevent suicides and save lives.

We Can All Take Action - Evidence shows that providing support services, talking about suicide, reducing access to means of self-harm, and following up with loved ones are just some of the actions we can all take to help others.

Crisis Centers are Critical - By offering immediate counseling to everyone that may need it, local crisis centers provide invaluable support at critical times and connect individuals to local services.

Risk factors are characteristics that make it more likely that someone will consider, attempt, or die by suicide, according to the Lifeline. They can't cause or predict a suicide attempt, but they're important to be aware of.

Alcohol and other substance use disorders

History of trauma or abuse

Lack of social support and sense of isolation

Stigma associated with asking for help

Cultural and religious beliefs, such as the belief that suicide is a noble resolution of a personal dilemma

Some warning signs may help you determine if a loved one is at risk for suicide, especially if the behavior is new, has increased, or seems related to a painful event, loss, or change. If you or someone you know exhibits any of these, seek help by calling the Lifeline.

Talking about wanting to die or to kill themselves

Looking for a way to kill themselves, like searching online or buying a gun

Talking about feeling hopeless or having no reason to live

Talking about feeling trapped or in unbearable pain

Talking about being a burden to others

Increasing the use of alcohol or drugs

Sleeping too little or too much

Withdrawing or isolating themselves

Call the Lifeline Anytime 24/7 at 1-800-273-TALK (8255) or visit suicidepreventionlifeline.org to chat with someone online. The site features numerous stories of recovery from real people.

World Suicide Prevention Day is Sept. 10. It's a time to remember those affected by suicide, to raise awareness, and to focus efforts on directing treatment to those who need it most.