WSD3 parade goes back many years 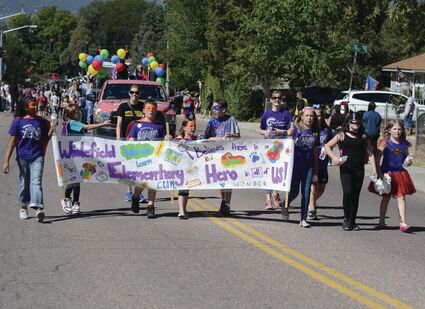 Staff and students from Widefield Elementary School participate in the 2018 WSD3 community parade through Security. After a hiatus last year due to COVID-19, the popular annual event returns this Saturday, Sept. 18, at 10:30 a.m.

Ask most Fountain Valley locals about the Widefield School District 3 (WSD3) Community Parade, and they'll tell you it's been going on for a while. However, people are not always sure whether it's another name for the Widefield High School (WHS) Homecoming Parade, whether it replaced that event, and if so when that happened. Here's the scoop.

While WHS had held a homecoming parade for decades, the WSD3 Community Parade combined that parade with a drug-free campaign, gradually replacing it as the district's big event. According to former WSD3 educator Don Castle, this started in 1987 when the district created the Substance Abuse Resources Team (SART), which took over the existing Red Ribbon program. Castle was a key member of SART, and remembers it was made up of physical education teachers and counselors from district schools, mostly junior high schools and below.

"For some reason, I was named sort of like the chairperson of that group – I was a counselor at North Elementary," Castle recalled. "We were tasked just with coming up with ideas to promote a drug-free lifestyle. We had a day off, we met at French Elementary, there were about 15 of us, and we just went through a brainstorm of what would we like to do... Someone said, 'How about if we tried to team up with the Widefield High School homecoming parade?'"

The idea appealed to Castle, a 1967 WHS graduate who knew the homecoming parade had lost some of its profile.

"We used to have, you know, class competitions with a bonfire and each class would do a float, but it seemed like that had kind of died down," he recalled. "I think they were no longer allowed bonfires for safety reasons."

The SART planned for a parade running from Widefield Square to Widefield High School. Each school in the district would be represented, wearing T-shirts with the parade slogan, "Pride Inside, Not Drugs." Each school would have versions of the shirt with their school colors, and to keep shenanigans at minimum, SART set a $1 fee to buy the shirts.

"We had some federal money, so we could have bought the T-shirts and handed them out to whomever wanted one, but we decided, 'No, let's have a little bit of buy-in,'" Castle recalled. "We were a little worried of teenagers that might have gotten a T-shirt and then put some crazy slogan of their own on it."

After generating their plan, SART had to present it to all of the WSD3 school principals for feedback.

"What really amazed me was when we first broached the subject to the principals, we got lots of questions – no obstruction, but they were really helpful," Castle said. "They wanted to know, "How can we make this work? Can I have a kindergartener walk a mile and a half from that shopping center to the high school?' So we came up with a weary walker wagon that would participate in the parade – if any little kids got too tired, they could sit on the wagon."

The first parade was held Oct. 17, 1988. Castle remembers it being called the WSD3 Community Parade from the start, although Fountain Valley News articles leading up and after the event called it the WHS Homecoming Parade in conjunction with the 1988 National Red Ribbon Campaign. This may have been a miscommunication with the paper, or show that it took several years for the parade to be rebranded.

"It was so much more of a success than we had thought," Castle said. "Each school had a sizable contingent on the morning of the first parade... and each school had their T-shirts, it was very colorful, there were parents and there were teachers walking and all that... The fire department got involved of course, and the cheerleaders from the high school, and then Watson and Janitell had their bands and cheerleaders got involved, so it was quite a spectacle."

Ultimately, the parade changed over time. In 1989, SART was replaced by a new group, Health Education Articulation Resource Team (HEART). HEART had a public safety emphasis, so the parade's message expanded beyond drug safety. Over the next few years, bigger sponsors (including a few from Colorado Springs) would get involved, further changing the parade's style and atmosphere.

"It became more a teacher-educator thing, less of a community thing," Castle recalled. 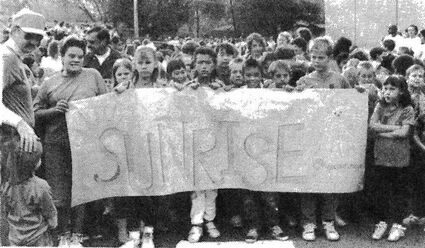 Students from Sunrise Elementary participate in the first WSD3 Community Parade in Oct. 17, 1988, with the slogan "hugs, not drugs."

Castle stopped being involved in the parade after 1996, the year he resigned as principal of Pinello Elementary to become a WHS counselor. While he hasn't kept track of the parade since then, he has fond memories of those early years.

"It was an amazing experience, first of all, to work with a very dedicated, committed and fun group of fellow professionals," Castle said. "Second, there was the acceptance and participation of the Widefield/ Security community in the parade. My family had moved to Security in 1958, and I attended South Vennetucci, then Sproul Junior High and Widefield High School. After my Army service, my first teaching job was at Janitell Junior High. I was always proud of having grown up in Security, and the parade was a way to let all see what a great community it was."