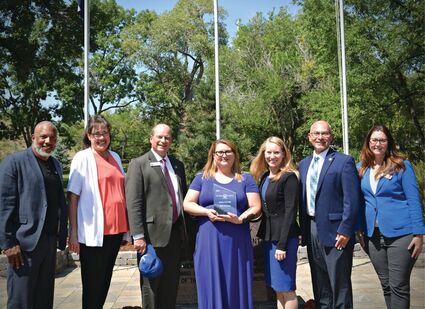 A resident of the Fountain Valley community was named the El Paso County "Veteran of the Year" at a ceremony on Thursday, Sept. 9.

El Paso County's Veterans Service Office and the Board of El Paso County Commissioners announced Skyler Nelson as the annual award recipient. She was one of four finalists in 2021.

"This is truly an honor, especially after hearing the amazing things that these fellow veterans are doing," Nelson said. "I am honored to even be standing up here and to even be considered among those veterans."

Nelson is an Iraq War veteran who served in the Army as a Chaplain Assistant. She is a graduate student at Pepperdine University, working on becoming a clinical psychologist. She's currently developing a veteran housing project in honor of her mentor, Command Sgt. Maj. Scott Bailey.

Nelson gave a lot of credit to Bailey, who died during active duty in 2018. Bailey, a high school dropout who went on to achieve the U.S. Army's highest enlisted rank, met Nelson when she was a new recruit and was her commanding officer during her first deployment. During and after the deployment, when Nelson was being treated for pulmonary tuberculosis, Bailey mentored her and made sure she had the accommodations she needed, even as Nelson's health struggles forced her to leave active duty.

"When I joined the Army, I was just a kid who didn't know anything about life, or the military, but Scott took me under his wing and taught me more than I could have ever imagined," Nelson said. "Scott even attended my wedding when we returned home from deployment... He was truly my Dumbledore."

Nelson joined the Army at age 17, missing her own high school graduation. She served in Iraq as a chaplain's assistant.

She has worked countless hours as a volunteer veterans advocate, volunteering her time with several organizations and advocating with local politicians to provide services for homeless veterans.

She is the Community Outreach Coordinator for K9's for Veterans Abroad, raising thousands of dollars to provide free service dogs to veterans. She is also involved with Homes for all Veterans and Green Beret Foundation among other local non-profits.

Nelson has her own website she designed to guide veterans to local services as well as a behavioral health group page on Facebook. She is on the school board for Spacious Skies Charter School, which is working to start a private school that assists special needs children. She works with Mental Health Colorado and advocates for the homeless and Gold Star Families. In addition to these volunteer efforts, she is attending graduate school to become Clinical Psychologist. She's also active in her church, Fellowship of the Rockies, and she gave thanks to God, her family and numerous supporters for helping her in her many endeavors.

El Paso County received a number of nominations for this year's award. Other well-deserving finalists were Andrew Gilbert, Al Batey, and Roger A. Fortin, who each has demonstrated continued service to the veteran community.