A labor of love: Fountain woman on mission to replace tennis courts 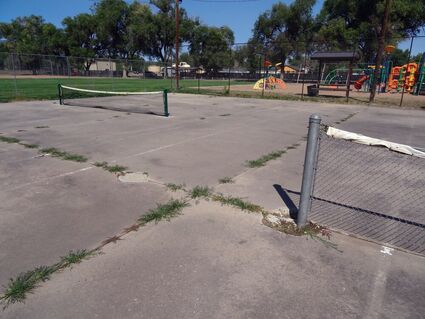 The tennis courts at Aga Park in Fountain have seen better days. One resident has started a fundraising campaign to generate money for a tennis court replacement project.

Fountain resident Dawn Harnick has started a fundraising campaign to renovate the tennis courts at Aga Park. Harnick started thinking about this project when she served on the Fountain Park and Recreation Advisory Board (FPRAB) from September 2017 to February 2019. During that period, the board researched the cost for renovating Aga Park's courts, but had to prioritize other projects.

"It just wasn't the right timing," Harnick reflected. "We needed to become ADA compliant in many parks, so that was the primary focus when I was on the board, just bringing parks up to code."

Even before that, Harnick had wanted to see the courts refurbished.

"It's always been a hope of mine," she said. "It is a tennis court that I grew up on. I lived right around the corner about two blocks away, so my sisters and I always played on that tennis court, and through the years it's just been deteriorated."

Her time with FPRAB created an opportunity to learn more about the Aga Part courts. Among other things, she discovered that those courts are one of Fountain's only tennis courts maintained by the city. The closest thing to a second tennis option is the courts at Fountain-Fort Carson High School, which aren't designed for family use or easy access.

Harnick set up a GoFundMe page on Sept. 2, with a goal of $15,000, which she knows will only cover a fraction of the costs. When she was with FPRAB, it was estimated that renovating the courts would cost $80,000. Fountain Recreation Coordinator Gordy McCormick recently held a meeting with Altitude Athletic Services (AAS) to get a current estimate.

"After meeting with AAS, [I learned that] the cost would be closer to $250k for new courts at Aga Park," McCormick said. "To renovate the existing courts at Aga Park would be a minimum of $100,000-$175,000 depending on the material we used. That price could change more or less in 2022."

While this leaves a long way to go, Harnick made it clear she's not trying to cover all the costs herself.

"The $15,000 is really just a number to show other organizations that we have community buy-in," she said. "I've had the opportunity to speak with a couple of nonprofits that provide grant funding, as well as other nonprofits that help you research and go for funding. The new way of grants, especially with organizations, is they are trying to get more resident feedback and resident-driven funding. They want to make sure that the community is involved in the process, and that the community is going to support the process."

Harnick plans to keep the GoFundMe up for a year while researching potential partners. In particular, she's looking for groups that match grant funding. 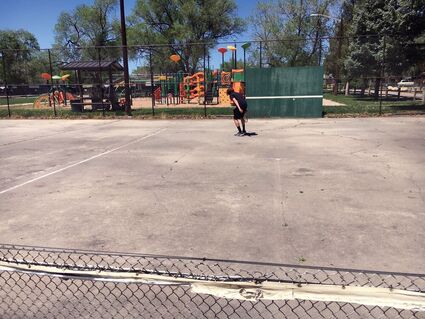 The aging tennis courts at Aga Park in Fountain are the subject of a new fundraising campaign.

"This is just one of those small steps, with a lot of big steps behind it," she said.

The city of Fountain has assisted Harnick, giving fundraising advice and researching potential donors. McCormick mentioned that his colleague Emily Covarrubias is speaking with T-Mobile and other organizations about grant opportunities.

"The city has been super supportive," Harnick said. "They realize that those courts need some love, so they're going to do what they can do on their part to help assist me in any way they can."