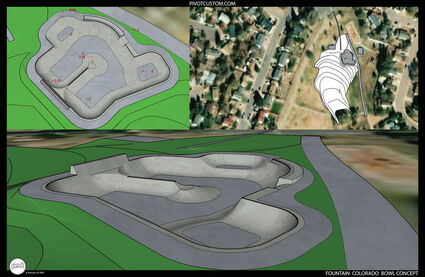 This conceptual drawing by Pivot Custom shows what the skate park will look like upon completion.

A new skate park is under construction at Fountain Mesa Park, located on Fortman Avenue behind Janitell Junior High.

"We are excited to be able to bring something a little further north," said City Clerk Silvia Huffman, director of Fountain Parks and Recreation.

Work began two weeks ago, and the project is expected to be finished in early November. Crews are taking a sloped section of the large grassy field across the walking path from the playgrounds to house the skate park. Much of the flat field beyond will remain untouched. 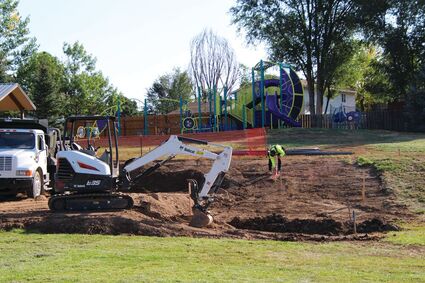 The city's other skate park at Metcalfe Park recently received a major makeover to improve its usability and appearance.

However, the skate park at Fountain Mesa Park will be different. Instead of raised metal structures, it will consist of a concrete bowl layout.

Workers preparing the site last week said they were eager to see the final result and assured this reporter that the facility will be "really nice."

The city has made multiple other parks improvements in the last year or so. In the summer of 2020, the city unveiled a new ADA-accessible playground at Aga Park. Similar improvements with new playgrounds were completed at Fountain Mesa Park in November 2020. Finally, the city most recently completed a new bicycle pump track at Metcalfe Park, which has been a popular new feature.