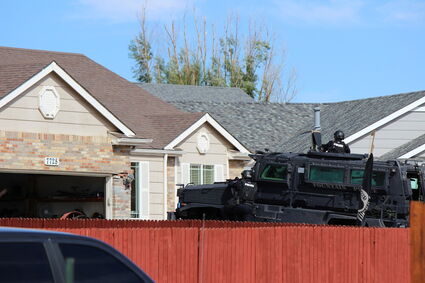 The FPD Rapid Response team prepares to enter a home on Sapling Court during an investigation involving a stolen vehicle Monday.

An alleged illegal marijuana grow and a stolen vehicle reportedly were at the center of a an hours-long standoff in Fountain on Monday. The Fountain Police Department's Rapid Response Team entered a home in the High Gate neighborhood this afternoon, alarming neighbors in the area. Area residents reported that a standoff had been underway for a few hours, and that they received an alert from El Paso County Sheriff's Office to stay inside. The neighborhood is east of Jimmy Camp Road, between East Ohio Avenue and Fountain-Fort Carson High School.

"We have a situation at a residence where people are refusing to come out," FPD Lt. Mark Cristiani said shortly after noon. "It is involving a stolen car. No immediate danger, but we have called out our Rapid Response Team just to be safe."

A reporter on scene witnessed several people being removed from the scene and placed in police vehicles while officers continued to demand the home's occupants come out.

"Just heard a big boom, that set off all the dogs, including the K9 officer," neighbor Julie Jones stated shortly after that. "Now they're saying they have a search warrant and to exit the residence."

Police eventually entered through the garage. It appeared that all residents were out of the home later, and police began to stand down.

People standing nearby commented that this home had been the scene of other incidents in the past. 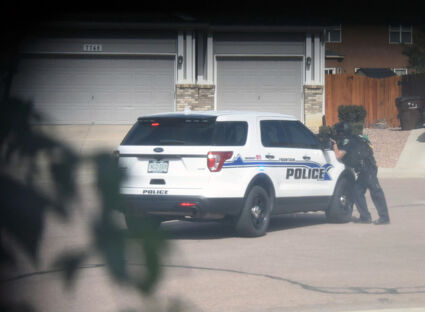 "Today at approximately 10:45 a.m. the Fountain Police Department received information about an illegal marijuana grow at a residence near the 7700 block of Sapling Ct. in Fountain, Colorado. While detectives with the D.I.C.E. (Directed Investigation Community Engagement) Unit were investigating, they came across a stolen vehicle inside the garage at the residence. Detectives attempted contact with the people inside the home but only one exited as the others refused to come out.

"The Rapid Response Team was called to the scene and eventually all five people came out without incident. Three individuals were arrested for outstanding warrants. At least two vehicles were recovered. Both were determined to be stolen from Colorado Springs.

"The investigation is ongoing into the stolen vehicles and the illegal marijuana grow."