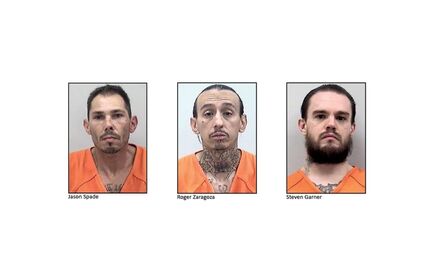 A series of burglaries – or attempted burglaries – in which suspects rammed vehicles into businesses to steal ATMs may be solved, with several arrests complete.

The pattern began to emerge on Aug. 20, police say. These burglaries occurred in five different jurisdictions within Colorado (El Paso, Fremont and Pueblo counties, and the cities of Fountain and Colorado Springs). These events caused extensive damage to the businesses, estimated at upwards of $20,000 per incident, and the stolen ATMs contained thousands of dollars in U.S. currency.

Detectives with the Colorado Springs Police Department’s Armed Violent Offenders Unit (AVOU) were able to develop suspect information, and with the assistance of the Fountain Police Department and Pueblo County Sherriff’s Office, executed several search warrants leading to the arrest of the 42-year-old suspect, Roger Zaragoza, for possession of a weapon by a previous offender.

On Sept. 15, AVOU detectives located and arrested Spade with the assistance of the CSPD Tactical Enforcement Unit. Spade was also charged with possession of a weapon by a previous offender.

On Sept. 16, AVOU determined Garner was in the Denver area. The Colorado Department of Corrections Fugitive Unit was contacted to assist and took Garner into custody without incident.

On Sept. 23, AVOU developed information on the location of Higgins, who was in the Canon City area. AVOU and Fremont County Sheriff’s Office took Higgins into custody at a residence after he rammed two law enforcement vehicles.