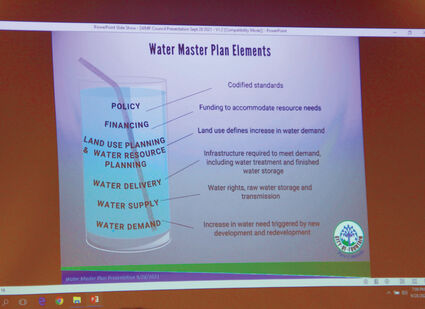 This graphic shows topics addressed by the city's Water Master Plan. Officials have said that water treatment for day-to day use is a key area of concern.

The annual demand for water in Fountain this year is around 1 billion gallons, and that number eventually will rise to 3.75 billion gallons once the city is fully developed sometime in the future.

That's just one of the many facts and figures discussed during the Sept. 28 public meeting on the Water Master Plan, the second in a three-part series.

"This is a vitally important plan that we're working on," Mayor Gabe Ortega said. "The water situation to the south of us is pretty dire, and we're going to be right in the middle of it."

How dire? According to city officials, reports earlier this...