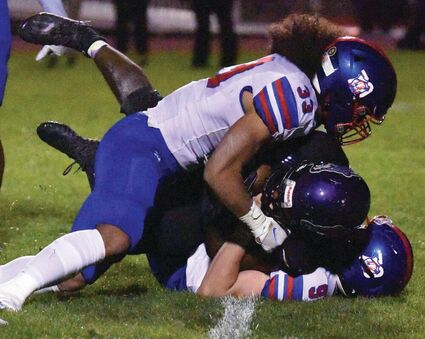 There's nowhere to go under the pressure of the Trojans' Tai Faavae and Noah Dawson, pictured during their game with Mesa Ridge on Friday. Below, FFC #92 Trevor Coleman gets a fistful of jersey on Mesa Ridge's Noah Ramirez.

The Gladiators lost 16-4 when they hosted Coronado last Tuesday (Sept. 28) and won 12-6 at Palmer on Thursday.

The Trojans won 8-2 when they hosted Lewis-Palmer on Monday.

The Gladiators won 48-6 when they hosted Palmer on Saturday.

The Trojans won 7-0 at Mesa Ridge on Friday.