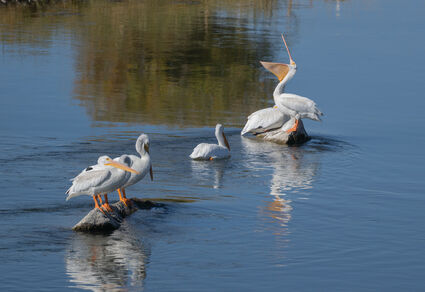 The following photographs are of American White Pelicans that I took from March through September at various locations in Colorado and Wyoming.

The American White Pelican is one of the largest birds in North America. They are about four feet tall with a wingspan of up to nine feet and can be seen along rivers, lakes and shallow wetlands (usually in flocks).

Most populations are migratory, spending the summer months west of the Rocky Mountains and northward into Canada. Early fall they migrate south to California and Mexico for the winter. 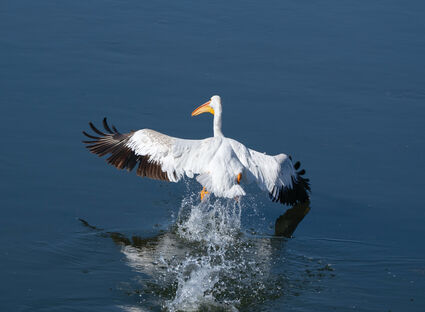 Locally, they have been spotted during the spring and fall migrations when they stop over at ponds and lakes. Some flocks spend the summer months at Colorado reservoirs like Antero Reservoir near Fairplay. Barr Lake near Denver has some year-round residents and more during the months from spring to fall. As of press time there were still pelicans at Barr Lake.

This spring they were observed at the Fountain Creek Nature Center and more recently, at Big Johnson Reservoir. Pelicans primarily eat fish, sometimes salamanders and crayfish. They can be observed dipping their bill into the water scooping up fish in their pouch. I watched a group of pelicans gather in a circle and appeared to hunt for fish with their heads all underwater. They have also been known to form a line and move the fish towards shallower water.