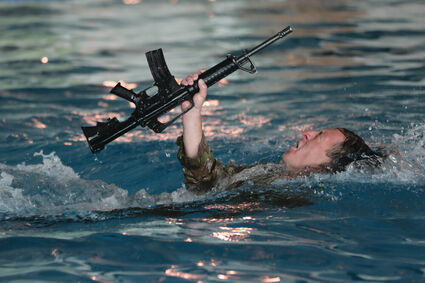 A candidate for the Best Sapper Competition swims on Oct. 13 at Ivy Gym, Fort Carson. The Soldiers were required to keep their weapons out of the water as they swam laps through the pool.

Twenty Soldiers competed in the 36th Engineer Brigade's Best Sapper Competition from Oct. 12-15 at Fort Carson. Ten teams of two Soldiers each from various installations across the nation participated in the four-day competition.

"Best Sapper is about teamwork" said Col. Anthony Barbina, commander of the 36th Engineer Brigade. "In the Army, engineers and sappers never do anything alone."

The competition was designed to physically and mentally challenge the participants as well as test their tactical proficiency.

"It's about forming teams and building bonds so we can fight and win our nation's wars," Barbina said. "The bond they've formed over the last four days is one I hope they'll keep for the rest of their lives."

The first day of the competition consisted of a welcome brief and the first event - a demolition test.

The second day consisted of three events - an Army Combat Fitness Test, a round robin challenge and a night land navigation event.

The third day consisted of a poncho raft construction test, a swimming challenge, sapper stakes and a 12-mile ruck.

The fourth and final day consisted of a multi-mile run with various events, such as uphill sandbag carries, tire flips, sled drags and more.

Directly following the final event, competitors ran into their battalion area, where the ceremony announcing the winners was held. 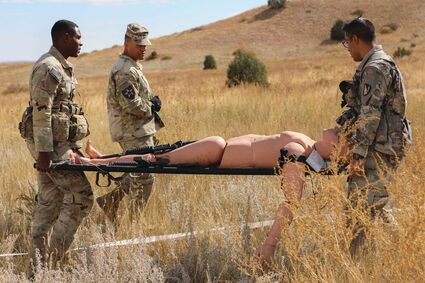 A team in the Best Sapper Competition carry a litter on Oct. 14.

Breathless, sweaty and tired, Capt. Zachary Beavor and 1st Lt. David Sadvary, assigned to Fort Carson's own 4th Engineer Battalion, were announced as the winners of the Best Sapper Competition.

"We're feeling pretty good," said Sadvary. "We're happy to be done, happy to get after it and happy to win for our battalion and our home turf."