Fountain resident seeks to introduce pickleball to the area 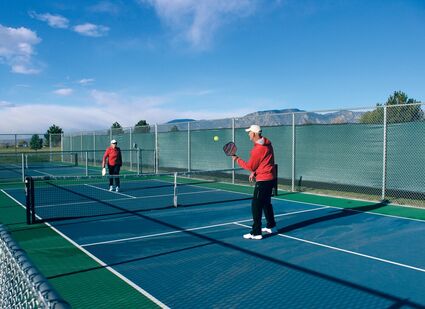 Craig and Lori Kimball play pickleball at the Windmill Mesa Park courts in Security, the only option in the Fountain Valley area.

If you're looking for a sport more challenging than ping pong but less physically demanding than tennis, then pickleball might be for you. In fact, a Fountain man is working to get out the word about this sport and hopes other people will join in the fun.

Craig Kimball, who coaches track and basketball at Fountain-Fort Carson High School, discovered the sport when a couple introduced him and his wife Lori to it. He found that the sport provided some great benefits, combining aspects of table tennis, tennis and badminton. Its smaller court size created faster games and less wear and tear than a typical tennis game. Players could do various positions, from singles to doubles to groups of three (two against one, alternating every game). Sometimes a group of six to eight people will play doubles in rotation, four playing and the other four socializing while they wait their turn. This gives pickleball a strong social as well as a competitive atmosphere, and may be why it particularly attracts older players. Retiree communities are one of the fastest-growing segments of the player population.

"There are complexes coming up all over the country that are 20, 30, even 60 courts in the complex," Kimball said. "It's very popular year-round in the southern states, especially among retirees."

While pickleball has been around for nearly 60 years, the sports profile has substantially increased in the last 30 years. According to the USA Pickleball Association (usapickleball.org), pickleball was invented in 1965 by Washington congressman Joel Pritchard and his friend Bill Bell. The United States Amateur Pickleball Association (USAPA) was organized in 1984, the same year that the first pickleball rulebook was published. By 1990, people in all 50 states were playing pickleball. Kimball estimated there are currently 40 companies making pickleball gear, and he highlighted how regional interest has exploded in the last 10 years.

"I went up and spoke to a guy with the Pikes Peak Pickleball Association, he said they started with 70 members in 2012 or 2013," Kimball said. "Now they have 1,400 members nine years later... and that's just the members. There are a lot of others that aren't members and they're estimated to be now over 4 million people around the country."

Through El Paso County, there are several places to play. Bear Creek Park currently has 12 pickleball courts, with plans to put in six more. Monument Valley Park has 15 courts, John Venezia Park has four, and Kimball mentioned plans to install courts at Banning Lewis Ranch. More locally, though, options are limited; Widefield Parks and Recreation's website states that it offers classes on four pickleball courts at Windmill Mesa Park. However, Kimball says those courts are only technically the proper size, and the park's location affects the courts' visibility.

"We have nothing down here other than four courts in Security that really were made too small," he said. "That's kind of an obscure park also, because it's not visible from any other places than just the surrounding neighborhoods, and not many people know about that park."

Kimball has spoken with Fountain Recreation Coordinator Gordy McCormick about adding courts in Fountain, and on Oct. 5 he gave a presentation to the Fountain Park and Recreation Advisory Board.

Kimball has also spoken with Fountain-Fort Carson School District 8 about making Fountain-Fort Carson High School's tennis courts more accessible to the public, and adding markings so they could double as pickleball courts. However, he particularly hopes to get new pickleball courts installed at local parks, such as Metcalfe, Aga or more preferably Fountain Creek Regional Park. He recently measured space at Fountain Creek Regional Park and estimates that eight or more courts could be built between its two gazebos on the west side. Since the park is El Paso County property, county funds could potentially be used for installing courts there.

"El Paso County realizes the importance of quality, and they can't build courts fast enough to keep up with the demand of people wanting to play pickleball," Kimball said.

However, these ideas hinge on whether Fountain Valley residents show enough interest to warrant installing the courts.

"The problem that we may have down here is that we want the community buy-in," Kimball said. "If you're not really into athletics or sports or something like that, maybe pickleball is a little more obscure type of activity."

Kimball hopes to solve this problem by encouraging people to try the sport out, and providing free lessons through the Pikes Peak Pickleball Association (membership costs $20 per year, free lessons and guided practice included). Based on how the game has spread in other areas, Kimball is confident that once the word gets out, it will move fast.

"From my perspective, once people start seeing this game and realize what it is... it's going to explode," he said.

To find out about pickleball lessons or ways to promote it, call Kimball at (719) 229-4251. To learn about the Pikes Peak Pickleball Association, go to pikespeakpickleball.com.