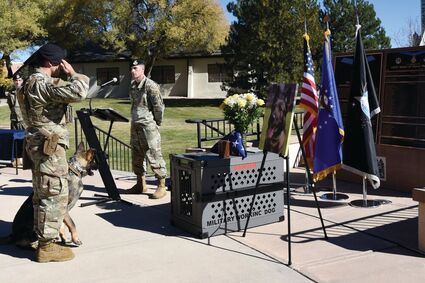 Staff Sgt. Logan Franks, 21st Security Forces Squadron military working dog handler, and MWD Ben, salute fallen MWD Rexo's display during his memorial ceremony at Peterson Space Force Base on Oct. 29. The empty kennel symbolized the ultimate sacrifice of giving their life for their country, and the leash and chain are to remind everyone the MWD is no longer bound to this world and may roam free.

"Trust in me my friend, for I am your comrade. I will protect you with my last breath when all others have left you and the loneliness of the night closes in, I will be at your side."

The "Guardians of the Night" poem completed the retirement ceremony of seven military working dogs and began the memorial ceremony of one MWD, Rexo, from the 21st Security Forces Squadron at Peterson Space Force Base on Oct. 29.

Dogs were not officially recognized until March 13, 1942, when the first K-9 corps was established. On May 1, 1957, the responsibility to train sentry dogs was taken over by the U.S. A...