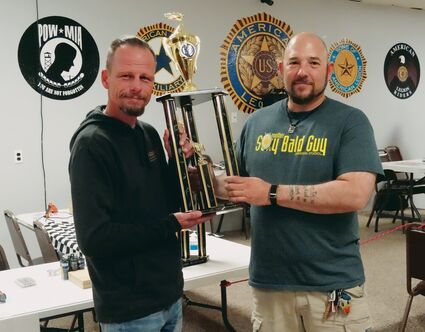 "The reason behind doing it around Veterans Day, or Veterans Day weekend, is to honor veteran organizations and first responders," Brown said.

Eleven first responders and veterans organizations were invited to the event. Due to COVID quarantine and various other circumstances, only the following organizations were able to register cars for the event: American Legion Post 38, Special Forces Association Chapter 4-24 and the El Paso County Sheriff's Office. "Ghost cars," spare pinewood cars from family and Boy Scout events, were used to run against the three cars in different heats, slowly being eliminated as the three competitor's average speeds were determined across multiple races.

COVID shutdown delayed the original date that SALS 38 was going to hold the race, which meant that the race had been planned for two years. The group hopes that this will become an annual tradition, with trophies passed around each year. 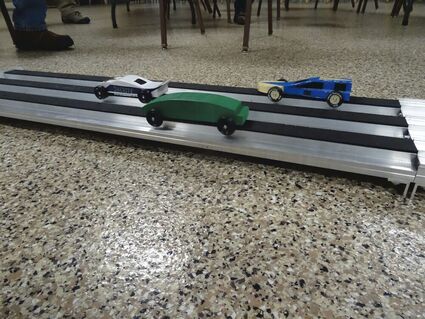 Some of the cars that participated in the American Legion pinewood derby are shown on the track above.

"We have a trophy for first place for first responder's organization, so they'll basically have bragging rights and a trophy for the year," Brown explained. "Then they'll bring it back for next year."

Plans are also in place for the second annual race to be a fundraiser for SALS programs. For the moment, though, the group just wanted to see how things went and for everyone to have fun.

"It's all about showing support for the first responders and the veterans' organization, and if one person has a blast, it's a success," Brown said. "Next year with the fundraiser, if we raise a dollar, I'll be happy because it's one more for our programs. If we raise more, it's all icing on the cake."