Man killed in heavy equipment accident near The Glen 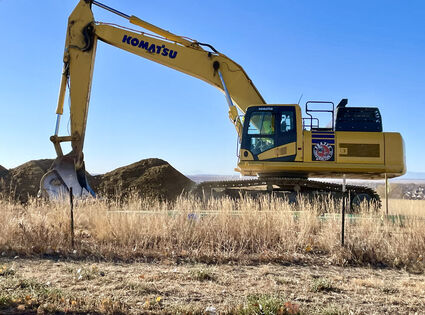 Numerous construction vehicles such as this line the side of Wayfarer Drive in The Glen neighborhood, where a man reportedly died after accidentally being run over.

A man reportedly was killed by heavy machinery during an accidental workplace accident along Wayfarer Drive near The Glen neighborhood on Tuesday.

The El Paso County Sheriff's Office says the 911 call reporting the accident came in at 11:44 a.m. The caller reported a worker at a commercial construction site in the 7000 block of Wayfarer Drive in Security-Widefield had been run over by a vehicle.

"When EPSO Patrol Division deputies and members of the Security Fire Department arrived on scene, they discovered an unresponsive adult male with serious injuries to his head," Sgt. Jason Garrett said. "Sadly, the man died on scene."

An initial scene evaluation and interview of witnesses did not reveal any suspicious details of the incident, Garrett added. As such, members of the El Paso County Coroner's Office responded as requested. Upon completing their initial evaluation, they will conduct a formal autopsy to determine the official cause of death. The man's identity will be released once the Coroner's Office has completed the autopsy.

Additionally, the federal Occupational Safety and Health Administration (OSHA) was notified. OSHA will conduct a parallel investigation into the incident as it was a job-site related accident resulting in death.

The site is the location of Security Fire Department's future new Station 4. Chief David Girardin said last week that the construction currently underway is related to installation of storm drains; SFD has not yet broken ground on the station, as it does not have building permits yet.