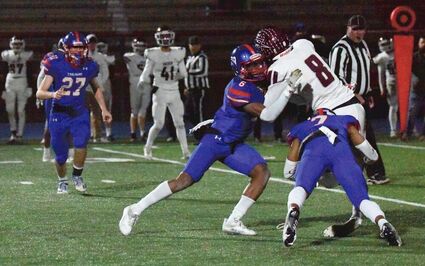 Myles McClarity and Jayden Allen tackle a Golden player, causing a fumble so that Michael Madrid could recover the ball during last Friday's game against Golden. Trojans won 41-0, with the mercy rule in effect.

On paper, it should have been a close game.

Golden, sporting a high-powered offense and high spirits after winning a playoff game after a 19-year post-season winless drought, would be going up against the league-champion Fountain-Fort Carson Trojans looking to extend a dominant 7-game win streak.

But games aren't played on paper. And the CHSAA 4A second round playoff game on Nov. 12 on Fountain's Ermel Field was not close.

The Trojans (10-1) have scored more than 40 points against opponents six times this season and kept the opposing team off the scorebo...