Jim Coke, Patricia St. Louis and Phil Thomas enjoy a meal at Coke's Diner. All three had been elected to City Council at the same time.

Larger than life. That is how I will remember my friend Jim Coke. Not because he was a big guy in stature, but because he did so much for our community, much more than most probably realize. And I would say, much more than any one person is capable of! Still he did it all, defying the odds and any notion that it was too much for one person or that it wouldn't be possible. Even when health complications from diabetes made things much harder on him, still he persisted, still he thrived through so much - exhibiting courage, humility and his deep love for our city!!! For these reasons he will forever be one of my heroes. Just as he should be honored as one of our city's heroes, too.

Jim and I knew of each other for a long time, (both of us having been involved in various community projects over the years, not to mention we often saw him and his lovely wife Kathy at Coke's Diner when we would visit.) But, Jim and I didn't know each other very well and we didn't always agree on things. You could say we saw things differently at times; which was fine. (What a boring world it would be if we never disagreed or challenged each other to see things from different perspectives.) Even then, I knew he was very dedicated to this community that he, too, loved calling home. I knew he and Kathy had invested much of their time and energy into making our little city a better place to be.

It wasn't until 2011, when we both decided to run for City Council, that Jim and I realized we saw eye to eye on a lot more than we had disagreed about previously. We both felt strongly enough about circumstances in our city that we made the choice to throw our hats in the ring, not knowing the other had done so as well. That was a major turning point for us. It was a thrill on election night in 2011 when local citizens selected the two of us to serve as Councilmembers At Large, defeating the two incumbents who were seeking re-election. I had the pleasure of serving with Jim in this capacity for four years and have some great memories from those times. One of my favorites was when Jim and Kathy offered to host a fundraising event at the diner, to benefit the City of Fountain's Lighten the Load program that assists those in need of help with paying their utilities bill. It was a fabulous evening for all of us involved, thanks to Jim and Kathy's leadership, generosity and compassion. Those words sum them both up quite well! 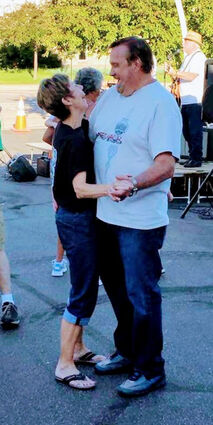 Kathy and Jim Coke share a dance at a car show kick-off a few years ago.

When our four-year term on council was coming to a close, I chose not to seek re-election due to life, work and time demands. However Jim ran again and won, and he went on to shine his light so brightly as one of our city's leaders. That wasn't all he did. He also served for years and years as a board member of the Fountain Sanitation District. I do believe he served on our Fountain Planning Commission prior to running for city council, and these are but a few examples of the many ways he made a difference in Fountain. He was also so very involved with the Thunder in the Valley Car shows. One of my favorite photos I have of Jim and Kathy (above) is of them dancing to the music in the parking lot of Coke's Diner, where they hosted a kickoff party for a car show weekend. The smiles on their faces as they gazed into each other's eyes said it all. So much love and joy between them; serving also as a reflection of the love and dedication they both have for our city.

I was blessed to see Jim the day before Heaven called him home. I thanked him for his friendship and all he has done for our city, and even made him smile when I brought up how we were elected together 10 years ago. I also assured him that I would make sure he will be remembered here for a long time to come. On that point, I would sure love to see our present city leaders and administration do something to memorialize this man who had one of the most giving hearts I have known. Indeed, he truly was larger than life. Jim dedicated himself toward making our city a better place; and it is!! He stands among our greatest, and deserves to be remembered here accordingly.