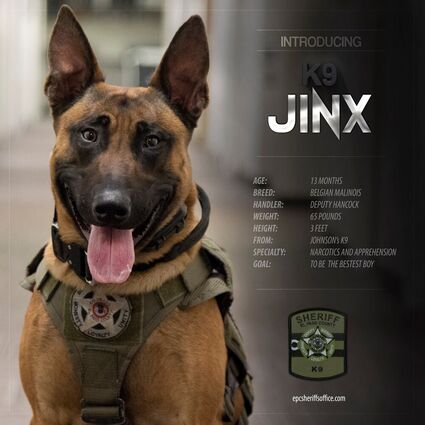 EPSO K-9 Officer Jinx was introduced to the community in May 2020. This image provided some fun facts about him at the time.

A man who reportedly pointed a gun at his driver was arrested near Widefield Community Park on Tuesday evening after a struggle with a K-9 officer.

Just before 5:30 p.m. Dec. 7, an on-demand transportation service driver called the El Paso County Sheriff's Office Communications Center to report that a man he gave a ride to pointed a gun at him during the trip. The driver said he was able to coax the suspect out of his vehicle in the 100 block of Estrella Vista Lane, left him there, and immediately called 911.

Sheriff's Office Patrol Division deputies, along with EPSO Tactical Support Unit (TSU) deputies and an EPSO K9 team, flooded the area to search for the suspect, identified as Salvador Velasco, 30. He was located a short distance away in the 1000 block of Drury Lane.

"Despite numerous verbal commands from deputies to stop and surrender to a lawful arrest, the suspect refused to comply and repeatedly reached into his jacket," EPSO Sgt. Jason Garrett stated in a news release. "He then made a movement toward one of our deputies while continuing to reach into his jacket. As a result, K9 Deputy Hancock deployed his partner K9 Jinx who contacted the suspect. The suspect continued to resist the K9 contact as well as deputies' attempts to restrain and arrest him. After a brief struggle, he was taken into custody."

Deputies later found a defaced firearm used by the suspect abandoned in the backseat of the victim's vehicle.

Velasco was transported to a local hospital for treatment for injuries sustained from the K9 contact. After he's medically cleared, he will be booked into the El Paso County Jail on the charges of felony menacing, prohibited use of a weapon, resisting arrest, and harassment. Velasco was also found to have an active warrant for his arrest from the state of Texas for the charge of felony burglary.

"The El Paso County Sheriff's Office remains steadfast in our commitment to combating violent crime and working to bring violent offenders to justice," Garrett said. "We stand with our community in working together to make El Paso County a safe place to work and live."