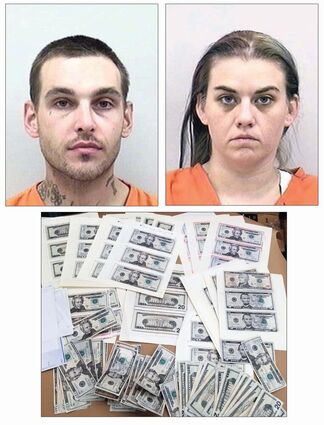 James Champagne and Kristine Chapman were arrested in Fountain on Tuesday for an alleged counterfeit money operation.

A routine traffic stop in Fountain reportedly led to the discovery of hundreds in counterfeit U.S. currency, as well as counterfeit-making equipment, on Tuesday.

Around 1 p.m. on Dec. 14, officers with the Fountain Police Department conducted a traffic stop in the 5500 block of Travel Plaza Drive (near Love's Travel Stop) for an expired temporary registration tag. Upon contact with the vehicle's occupants, later identified as 36-year-old James Champagne and 30-year-old Kristine Chapman, officers discovered drug paraphernalia, brass knuckles and counterfeit currency.

According to a news release from FPD, officers later conducted a search of the vehicle where they located hundreds of counterfeit U.S. currency, templates and items used to make the counterfeit money, multiple people's personal identifying information and checks that appear to be fraudulently made.