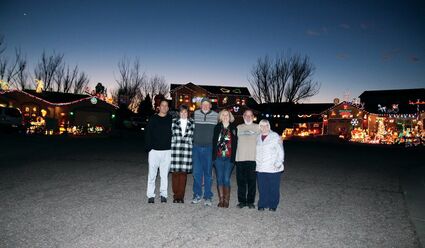 Three sets of neighbors on Quinlan Court in Security have been partnering to decorate their homes with massive amounts of holiday cheer for a quarter century now.

Some neighbors just barbecue together; these neighbors deck the halls – well, most of their cul-de-sac, actually.

Security residents may be familiar with the bright holiday displays on Quinlan Court, located just north of the Post Office near Grinnell Boulevard and Crawford Avenue. What they may not realize is that the same three families have been decorating their homes like this for 25 years now.

"We all moved in during September and October 1996," Paula Lowder explained. "We were the first to move in out of the three."

It didn't take long for the families to realize they had something special in common. That first Thanksgiving weekend in their new homes, each family was outside decorating. They couldn't believe their neighbors were going to the same lengths. At the time, a fourth family was decorating, but they moved away in 2009. For some years, all their houses were connected with cables that held signs between all the homes, "Merry Christmas" and "Happy New Year" messages.

Paula and her husband, Tim, bought the house at 1225 Quinlan Court. Their two children, Chelsea and Brandon, are now adults and grew up decorating in this environment.

"As soon as they were old enough to get on the roof with their dad, they did and looked forward to doing it every year," Paula recalled. "The year our son joined the Navy, he talked us into buying the Santa hot air balloon. He always reminds his dad that he needs to put it out. We didn't put it out for a few years, but it's out this year."

On one side of the Lowders is the home of Dave and Rose Harper, who have a deep love of Christmas and the joy of decorating. As the neighbors will attest, the inside of the house mirrors the outside. Rose has a huge collection of Christmas décor, some of it from her native Germany. She has been collecting for decades. Dave has his own touches, including an extensive collection of Harley-Davidson Christmas items. The couple rents a storage unit to accommodate their many holiday items the rest of the year.

On the other side of the Lowders is the residence of Mark and Diana Ballinger. They also have an adult son named Brandon, and they have always decorated out of enjoyment and for the people who like coming by to see it.

The three families have many great memories from their decorating experiences over the years.

"A lot of passers say thank you; they have been coming to our street for many years," Paula said. "One time we had a family stop and say they had to go buy more film for their visiting relative from Japan because she took so many pictures. Kids that grew up with my kids are now bringing their kids by to see all the lights. We have families walk through during the day and drive by again at night so they can take it all in. It's fun to come home at night and wait your turn so you can get into your driveway. Our granddaughter who is 4 is always excited to come home to Grammy and Papa's to see all the lights."

One year when Dave dressed up as Santa, he had a bucket with candy canes to hand out to visitors. Someone thought he was collecting funds to help pay for the electric bill and put in a donation.

"One Friday night many years ago, about 10 p.m., our doorbell rang, we looked out and the bus from Fountain Valley School was parked in the cul-de-sac and the students were caroling," Paula said. "We opened the door and they sang a couple songs and were so excited we came outside. That was a great memory!"

Ownership of the neighboring homes has changed several times over the years. New neighbors are usually surprised with the amount of decorating the three families do.

"Some have laughed and said they don't want to see our electric bill in January," Paula said. "Most have found it contagious and have joined in lightning up their house." 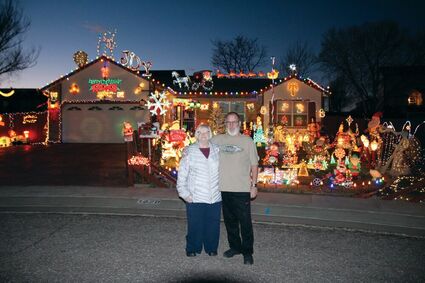 The neighbors on Quinlan Court in Security who have been decorating their homes together since 1996 are shown below. From the top, Dave and Rose Harper, Tim and Paula Lowder, and Mark and Diana Ballinger. At right is a close-up of the countdown to Christmas in the Harpers' yard. At far lower left is one of the many displays inside the Harper home, including collectibles from Rose's native Germany.

Although all three homes started with a decent collection of decorations 1996, they've grown their inventory steadily over the years. Most of it was purchased locally at stores such as Walmart, Target, home improvement stores. In years past, former retailers such as Kmart supplied some items. These residential experts can testify that the older the products, the better the quality. And this year's supply of new Christmas lights available in stores was disappointing, they said.

Decorations range from the classic Santa and rooftop stars to the quirky – like the blow-up outhouse on the Ballingers' front lawn.

"That's where his wife makes him go," quipped Dave.

A few circuits were blown in the early years, but the guys always figured out a way to fix and prevent it from happening again. The families always help each other out with decorating or taking down the decorations, especially if anyone has been out of town or sick.

Why do they continue all the effort and expense after all these years?

"The three of us continue to do it for the kids in the area, and also for our own families," Paula said. "We enjoy how appreciative the people are and how happy it makes them when they drive through. Seeing them wave and smile is priceless. Also, the fact that some have been coming since they were kids and now they are bring their kids is awesome."