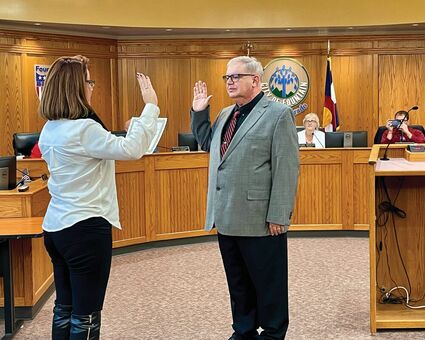 Gordon Rick is sworn in as the newest Fountain City Council member.

The final new member of the Fountain City Council was sworn in last week, and the council selected a new mayor pro tem – after a lengthy and confusing voting process.

It also was announced that to distinguish between two family members with the same last name, newly elected member Cory Applegate would be referred to as "Council Member Cory," while his father, Richard Applegate, would continue to be called "Council Member Applegate."

Tamara Estes, who has served as the Ward 2 representative since 2019, was elected by her fellow council members to serve as the mayor pro tem, which is a position that fills in should the mayor be absent.

Council members were asked to submit nominations for the position by writing names on a piece of paper, which then were collected by City Clerk Silvia Huffman. The idea was to develop a consensus on a potential nominee, then proceed to a vote. However, only six council members submitted names: two for Gordon Rick, two for Richard Applegate, and two for Estes. No one acknowledged not submitting a name, nor a reason for not participating.

What followed was a discussion as to how to vote since there was a three-way tie. Frederick Hinton moved for Gordon Rick to take the position. Rick seconded. The council voted 2-4, with Cory, Applegate, Estes and Mayor Sharon Thompson voting no. Detra Duncan said she was abstaining. This resulted in a conversation about what that meant for the vote, and Huffman called for a recess to allow City Attorney Troy Johnson to research the City Charter for guidance.

After a 15-minute recess, Johnson explained that a member who is silent on a vote is assumed to be a positive vote; abstaining from a vote simply means that vote is neither positive nor negative, and the total number of votes is decreased by 1. There needed to be a majority of 4 votes to pass this item.

Cory motioned to appoint Applegate, and Applegate seconded. That vote was 3-3, with Estes, Rick and Thompson voting no, and Duncan again abstaining.

Lastly, Rick motioned for Estes to be appointed, with Estes seconding. Applegate and Cory voted no, and Duncan again abstained, and the motion carried 4-2.

In other procedural matters, Rick requested that the council revisit the start time of council meetings. This was to be discussed on Dec. 21, and the outcome of that discussion will be reported on in next week's issue.

The issue of city employees serving on governing bodies of other cities also raised interest. Resident Fran Carrick said while she admired City Engineer Brandy Williams' enthusiasm for wanting to serve her city of residence – Colorado Springs – on its city council, the concept concerned her. City Manager Scott Trainor responded that he had begun to look into Fountain's personnel policies and that amendments on this topic may be presented in the near future to preempt any potential conflicts of interest.

In other business, the council approved the City Vision Statement and Strategic Priorities for 2022-24. Newly defined priorities are:

Develop, coordinate and implement initiatives and programs, in collaboration with the community, that diversify city financial resources and invest in the Enduring Interests of the City Vision Statement.

Referral of an annexation request to add 22 acres attached to the previously approved Singer Ranch development, which is located south of Fontaine Boulevard north of The Glen.

Consolidation of two part-time positions in the Streets Department into one full-time slot to better recruit applicants.

Set a public hearing date of Jan. 25, 2022, to consider a liquor license for Family Dollar at 108 N. Santa Fe Ave. Huffman explained this would be a fermented beverage license, meaning beer is the primary product involved, and that the site falls outside the minimum radius required from a school.

The lease of two Mack trucks from Bruckner Truck Sales in Fountain, and financed through KS State Bank, for $40,604 annually for five years, an interest rate of 2.96 percent, and a final purchase payment of $180,000 at the end of the term if the city opts to keep them.