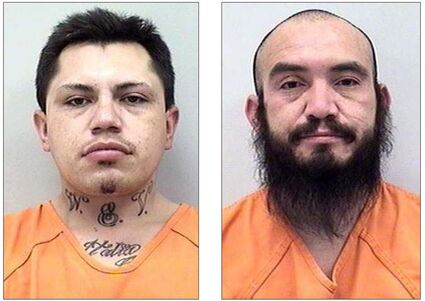 Two men were arrested in Fountain after police found them in a stolen vehicle and in possession of weapons and drugs.

On Tuesday, Dec. 21, at approximately 2:30 a.m., officers with the Fountain Police Department responded to the 500 block of Windsor Lane (off Crest and South Santa Fe Avenue) in reference to a shots fired call for service.

Upon arrival, officers located a stolen vehicle occupied by two adult males. When officers tried to make contact with the vehicle's occupants, later identified as 32-year-old Toby Herrera and 27-year-old Orlando Colangelo, they both ran from the vehicle. After a short foot chase, both Colangelo and Herrera were caught and taken into custody. Herrera was found to be in possession of an assault rifle.

Officers conducted a search of the vehicle where they located another assault rifle, and Orlando was found to be in possession of ID documents and suspected Schedule II controlled substances. Herrera and Colangelo were later booked into the El Paso County Jail. Colangelo was charged with: motor vehicle theft, possession of a weapon by a previous offender, prohibited use of a weapon, DUI and obstructing a peace officer. Herrera was charged with: Possession of a Controlled Substance and Criminal Possession of ID Documents.

Colangelo was out on a personal recognizance bond in a domestic violence case. He has prior felony convictions for: menacing, vehicular eluding and Theft.

Herrera has a prior felony conviction for robbery. He also has prior convictions for obstructing a peace officer and multiple driving offenses.