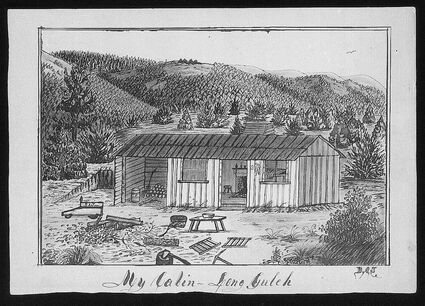 A drawing of Daniel Jenks' cabin made by Jenks himself. At right, a portrait of Jenks.

Editor's note: The following is a taste of a first-hand account of 1800s traveler and prospector Daniel Jenks from the new book "The Lost Gold Rush Journals" by Larry Obermesik of Hanover. The book covers Jenks' experiences - in his own words, transcribed from his journals - of the California Gold Rush and then his arrival in Colorado, not far from here. Obermesik's story was featured in our Dec. 1 issue. You can meet the author at a book signing on Jan. 15 at the Barnes & Noble in Pueblo.

"All the world appears to be going that way," wrote Daniel Jenks. It was the mid-19th-century craze and scramble for gold that pulled many to California.

Countless amateur treasure seekers making the treacherous trek there from all corners of the globe. Jenks was one of these, pulled by the gravity of gold from a peaceful and prosperous Pawtucket, Rhode Island, life.

Yet the true treasure of Jenks' travels, toil, trials and triumphs turned out to be the journals that he meticulously wrote and kept along the way, chronicling Daniel's Odyssey over oceans and earth in search of wealth and adventure.

His journey begins with a treacherous and tedious eight-month ocean voyage southward, passenger aboard a ship rounding Cape Horn on its harrowing horseshoe course toward California.

There, Jenks finds he's traded shoals and other sea hazards for the land-shark-infested tent villages of gold-rush San Francisco.

In this "sink of iniquity," he continues, "murders, robberies and thefts are everyday affairs. Bowie knives, revolvers and pistols of all kinds are part of a man's daily apparel. Men die in their tents unknown and uncared for, friendless and alone."

Join Daniel Jenks as he details and documents his experiences during this extraordinary chapter in American history, a tale delivered to us in the Argonaut's own words, rich in the color and singular culture of these gold-rush boomtowns.

At last - at last. 234 days out, and here we are safe and sound, after a trip of (according to the ship's log) over 23,000 miles. A long, long road to travel, but we have done it at last and our old tub true to the last, came into her port stern first.

About 2:00 AM all hands were awakened by the gruff voice of the Mate, yelling; "All hands ahoy, the damned ship drags, hurry up here or we'll go ashore amongst the breakers."

I ran up with the rest, all was dark as pitch, but we could see breakers foam through the darkness on each side and ahead of us. Their booming roar was anything but agreeable music to us and all were more or less excited at the prospect of being wrecked upon these rocks.

And whether we were drifting in or out, or how long we had been drifting, no one seemed to know. "Come forward here the best Leadsman in the crowd and heave the lead," sung out The Old Man.

And Luce Nurse, one of our fellows (an old Man of War man) jumped upon the rail and sung the soundings as we drifted along. Meanwhile the men were busy getting anchor and chain aboard.

But we finally drifted by a ship at anchor, who in reply to the Captain's hail as to where he was, replied; "in Francisco Harbor you darned fool, where did you suppose you was?"

We dropped those mud hooks again and this morning we find ourselves off the North Beach, Francisco Harbor. I don't know how it is, but I will bet that of all the craft that ever came into this port, we are the only one that ever-backed in.

How the old tub ever managed to drift clear of all rocks and drift up without touching anywhere is strange to me ~ but here we are at last. As to how this country looks, I can't say.

For all one can see from deck is fog-fog-fog, with occasional glimpses of hills around us and occasionally a boat shouts out from the fog bank ahead and steers across the bay to some unseen ship, I suppose.

Our neighbors of the ship alongside proves to be a whaler from New Bedford, who was unfortunate enough to put in here and his crew has left him for the mines.

Went ashore today. It is a difficult matter to describe this place. Imagine a town built of cloth, with here and there a wooden shanty, an adobe house or two.

No system, no order but all the excitement, hurry and bustle. God's sun never shown upon another such a place. A few short months ago there was a small village of adobe houses but now here is a town – or collection of tents and temporary houses – with a population of men from all parts of the world.

The streets are full of merchandise of every kind. Piles of flour in 50- and 100-pound sacks lie outdoors in large heaps. Beans in sacks. Preserved fruit of all kinds are laying around in piles, there not being storeroom for them.

Most of the buildings are slight frames, covered with cloth, papered inside. A few are frame buildings, hastily put together without regard to beauty or durability.

The future is never thought of. But with all men here, the great present - the present time - requires all their thought and energies to look after. Wages are high. Carpenters get $16 dollars a day, in fact all mechanics get that.

Land rents at about a dollar a foot and in the business part of the city is worth as much as it is in Broadway New York. Provisions are cheap, markets glutted. Vessels of large draft are worth but a song, whilst small craft for navigating the rivers are worth small fortunes.

There are about 900 craft here from all parts of the world. Freight up the river is $40 a ton and passage is $35 a head. Houses are built and disappear like magic, as they are torn down or removed by tenants whose short leases expire.

Underpinning stuff is scarce, I should judge. As there are several two-story house buildings whose underpinning is boxes of tobacco. At night the city is noisy, with the shouts of drunken boatmen and others who nightly squander their wages of the day in the gambling and drinking houses of the place.

Will you take my trunk to some Gamble House says a gentleman the other day in my hearing to a rough-looking fellow on the landing. "Well, I reckon I will," says Rough, "how much will you give?" A dollar says stranger. "I'll give you five to carry it yourself," says Rough, tendering him a five-dollar piece.

Such is life here at the present. Money is almost valueless. Murders, robberies and thefts are everyday affairs. Dead men are picked up in the streets nearly every morning.

Bowie knives, revolvers and pistols of all kinds are part of a man's daily apparel. Men die in their tents unknown and uncared for, friendless and alone.

Last night a boat crew from one of the US Man of War in the harbor threw their midshipmen overboard and tried to drown him by striking him on the head with their oars and left him for dead. Pulled for the shore and have not been seen since.

The Middy was picked up alive. Death will be the portion of this crew if arrested. This is truly a perfect Sodom.

You can listen to an audio version of this content by clicking the links below.