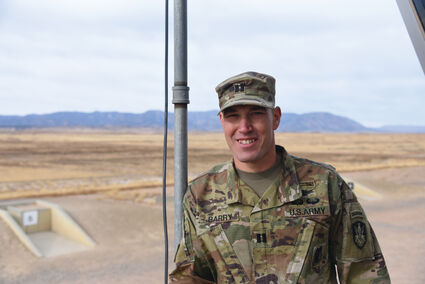 When a Soldier in Space and Missile Defense Command (SMDC) has a Ranger tab on their shoulder, one takes notice. There's not too many space Soldiers that are graduates of the Army's grueling Ranger school at Fort Benning, Georgia. Capt. Kyle Barry, commander of 5th Detachment, 4th Space Company, 1st Space Battalion, 1st Space Brigade, is one of few in the command who has done so. While downrange recently at Fort Carson, Colorado, I took a few minutes to speak to him about his career, leading Soldiers, and what it's like to go from an infantry career field to a space one.

Q: What have been some of the highlights of your almost 18-year career?

A: My time spent in the 82nd Airborne (Division). The cardboard cutout of the Soldier in his jump boots at the recruiting office just spoke to me when I was 18, and I knew that's what I wanted to do. While I was at Fort Bragg, I deployed twice – once to Afghanistan in 2005, and once to Iraq in 2009. Then my most recent deployment in 2018 as a platoon leader and a rifle company XO (executive officer), we were the first rotation to provide protection for a security force advisor brigade at a base called Tarin Kowt in Afghanistan. The camaraderie we all had on that deployment is what kept us going on that one.

A: Ranger School at its core is pitched as the Army's premier leadership school, and what I got most out of it is where my all-time low was. And you have a platoon of Soldiers that are also at their all-time lows and you are constantly rotating them in and out of leadership positions, so if you can get yourself though the school when you are hungry, cold, tired and depleted and motivate those other Soldiers in your platoon to achieve a common goal when they are at their all-time low, then that in itself will transcend anything else you need to do there, if that makes any sense. You just have to put everything into context when you are going through it and say 'hey things aren't that bad; let's get through this together and celebrate when it's all over.' Ranger School is the most physically and mentally challenging thing I have ever done. It's a grind.

Q: You are new to the Army space community. How has the crossover from an infantry lieutenant to an FA40 (space control operations officer) been?

A: It's been a huge culture shift. When I was infantry and out in the field training and deploying it was a lot more tactical. Space is 100 percent technical. A lot of what I learned in the infantry carries over though, but it's the technical execution in space that has blown my mind the most.

Q: What do you enjoy about being an FA40?

A: I love it. It's the strategical assets that we are dealing with now that I had not been exposed to in the past. This new career field will make me more well-rounded as an officer. Before it was all boots on the ground execution. Now it's big picture operations. I want to become as technically proficient in what I am doing here to hopefully transition out of the Army and into a civilian career in the space sector. I don't have the background to build space hardware, but I have the background to manage projects within the industry.

Q: What is your leadership philosophy?

Q: What do you most like about working in this command?

A: The culture and the people. The strategic outlook and the technicalities of our jobs – I'm still new to all of it – so it's refreshing to me. This is a different mentality here. And I say different as a good thing. And I will say, I have been in the Army for almost 18 years, and in the only six months I have been in the brigade, they have done more events with Soldiers and families to boost morale, than I have seen in a long time.