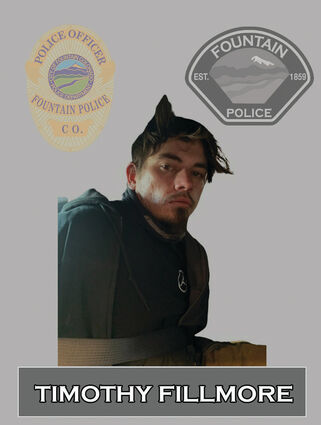 On Monday, Jan. 3, at approximately 6:45 a.m., Fountain Police officers responded to the Tomahawk Truck Stop, located in the 1100 block of South Santa Fe Avenue, in an attempt to locate a reported stolen vehicle that was equipped with OnStar.

When officers arrived in the area, they observed two males going between the reported stolen vehicle and another vehicle that was also reported stolen. Both males were taken into custody and identified as: 29-year-old Timothy Fillmore and 37-year-old Michael Bryant. A search of the suspects and the stolen vehicles showed that both males were in possession of handguns, burglary tools, stolen motor vehicle parts and drug paraphernalia. Fillmore was also in possession of suspected heroin and methamphetamine.

Both Fillmore and Bryant are currently on parole through the Colorado Department of Corrections. Bryant's criminal history shows previous felony convictions in 2021 for: motor vehicle theft and possession of a weapon by a previous offender to which he was sentenced to prison for three years.

Fillmore's criminal history shows previous felony convictions in 2018 for: menacing (2 years Colorado Department of Corrections), 2019: Escape (2 years DOC), 2021: possession of a weapon by a previous offender (15 months DOC). Both Bryant and Fillmore's sentences ran concurrently (at the same time), which is why they were eligible for parole and didn't have to serve the entire incarceration sentence.

They were both booked into El Paso County Criminal Justice Center on the following charges: