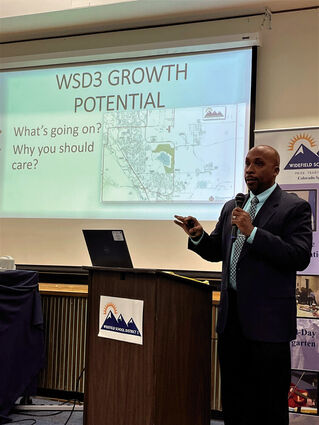 Widefield School District 3 Superintendent Kevin Duren, during a Community Conversation session hosted by the district on Jan. 25, said "staying small is no option" when referring to the type of growth the area will experience in the next five to 20 years.

Duren and WSD3 Chief Operating Officer Dave Gish hosted the session, which featured eye-opening facts and figures about future growth in the area. According to them, in the next four to five years, it's likely that the district will see construction of as many as 5,000 homes and apartments, necessitating building of two new elementary schools and one new junior high school.

Starting the presentation, Duren noted that this is "preliminary information only. Lots of things can change." He added that talks with builders and developers allow the district to plan "how we're going to handle the challenges of the growth we're currently seeing."

The developments that will contribute the most new home construction are, according to Duren: Lorson Ranch (714 more homes), Bradley Heights (2,500+ more homes), Aspen Ridge (680 more homes), and Corvallis (989 new homes). Duren said the exact figures for each development may fluctuate, and that other projects will probably  come online as well. Lorson Ranch, Bradley Heights, and Aspen Ridge are all located east of Powers Boulevard and south of Bradley Road, while Corvallis is located south of Fontaine and west of Marksheffel Road.

Duren said WSD3 is now experiencing the fastest  growth rate it's ever seen, and that the presentation was given to prepare residents for the imminent realities that accompany rapid growth. Duren and Gish listed 16 developments that have filed paperwork indicating their intention to build in the district's area.

According to the paperwork, these developers will add from 19,000 to 25,000 new homes and apartments within the next 20 years.

As an example of how difficult it is to plan for new schools, Duren said the district, based on developers' estimates, planned on having 600 students at the new Grand Mountain School in Lorson Ranch when it opened in 2019. Instead, the school had more than 900 students. Duren noted that the "Lorson Ranch community probably tripled over the last five to seven years."

Duren said although there are no active plans for any new schools, as soon as the district sees "dirt moving," it will begin planning for the appropriate schools.

The Jan. 25 meeting was the first of several the district will host as the area continues its rapid growth.