Pikes Peak or Bust! A first-hand account of the Colorado Gold Rush that had never been published before now 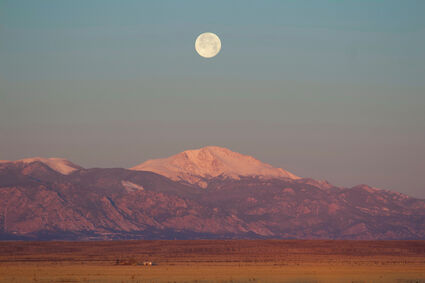 Between 1849-65 Daniel Jenks had the forethought to chronicle his gold-rush trials, tribulations and triumphs across the American West. Writing to an "imaginary confidant" in his journal, Jenks shared his innermost thoughts with the reader, the dreams and fears that drove him.

Daniel's cross-country odyssey in 1859 took him from Rhode Island to Colorado, and then back to California where he'd been prospecting for gold on-and-off since 1849. Jenks documented 130 campsites on the trip, even drawing some of them, leaving us a detailed record of his (mis)adventures along the way.

But until 2021, Daniel Jenks' first-hand account of the Colorado Gold Rush remained undiscovered in the Library of Congress archive, read by few and never published.

We join Daniel's story as the small band of Argonauts (including Lissy, who is very pregnant) begin their treacherous trek across the American Wilderness, bound for the Rockies. For Jenks & Company - it's Pikes Peak or Bust!

This morning I turned out from my blankets spread on the ground, as fresh as though my bed had been of down. Lissy soon after made her appearance and breakfast having been dispatched, we got the cattle up and rolled out on the road. Passed through Westport and about noon camped at the springs.

And now that we are on the road, before we go any further, let me introduce my traveling companions.

First, Loren is an old California friend of mine. We have both seen some hard times before and camping out is nothing new to us. He returned from California soon after I left there, went home to Michigan, got married to a young schoolmistress about 18 years of age and intended to settle down there for life. But he became restless and taking the Pikes Peak fever wrote to me that he was going out, invited me to join him and now here he is with his young wife on the road.

His brother Judson is a perfect specimen of the Mountaineer of the Rocky Mountains. In the year of 1852 Jud and Loren started out from their home in Michigan to seek their fortunes, Jud being 16 and Loren 18 years old. Arrived at the Missouri River, they hired out to a teamster who was about starting out with a train loaded with supplies for Fort Laramie.

After the usual hardships attending a trip across the plains, they were finally hemmed in by snows at Ash Hollow. The expedition becoming short of provisions, an extra express was sent out on foot to try to reach the fort to get assistance. Jud and two others volunteered for this service.

They traveled on through the snow for days, until their feet became badly frostbitten and their provisions giving out, they started to return to camp. But by this time Jud gave out and could go no further. And his companions, not much better off, left him to his fate. As they expected never to see him alive again.

For nine days he sustained life by crawling on his hands and knees from his nest in the snow and grubbing for roots. On the ninth day, he heard someone hallooing and he answered them. They proved to be a party sent out in search of him from the camp.

He was drawn back on a sled and his life was spared. But he was crippled for life, having lost all of his toes and most of his fingers. Since then he has lived in the mountains, most of the time at Bent's Fort, until last summer. He, having heard of Loren's return from California, went home to see him. He has lived so long out of society that he is unhappy in it and is far more happy now that he is once more on the road, than he was at home.

Another one of our mass is Charlie Upham. A long-legged, gaunt Yankee about 22 years old who Loren picked up at his home in Michigan, where he was clerking in a small country store. He is a good-natured easy-going sort of a fellow but perfectly useless about camp, being as ignorant of this sort of a life as any other Greenhorn.

The other member, Dan Keedwell, is an Englishman, bullheaded and going to Pikes Peak because he wants to see the "bloody country", he says. He was reared on a stock farm near Bristol England, came to this country about three years ago, has traveled up from place to place pretty much all over the States and now wants to see the wilderness, he says.

We six of us are in company. We have a good three yoke ox team, loaded down with provisions, about a ton in all, and with Lissy on top of the load, whilst we trudge along on foot. At night our tent is pitched, and we vacate the premises while Lissy gets into bed and then we turn in ourselves. Rather close stowing for a man and his wife and four big buck men to sleep in one small tent, about 10 feet in diameter.

But we all manage to get along without much crowding, although Charlie says if he had known how small a compass he was compelled to sleep in, he should have tried to stint his growth and taken about a foot off of each leg, so as to have kept his feet inside of the tent nights. For in spite of him, they get stretched out under the tent every morning.

Slept first rate last night, Lissy is busy all day baking cakes and bread. Myself and the other boys have been busy all day getting out a lot of spare ox bows, pins, tent poles etc., preparing for our trip. For we soon will be where there is no timber and we must prepare all these things before we start.

Just above us on the road stands the remains of the Old Shawnee Mission Church, the former rendezvous of Buford's Company of border ruffians. A very bloody spot during the Kansas war. Many a man has here been compelled to give up not only his property but in many cases his life even, on this spot. Often during that time were the inhabitants near here awakened by the death shrieks of some poor unfortunate, who had fallen into the hands of these desperados.

Last night was an awful one. It commenced raining and blowing about 10 o'clock but we all lay still in our tent, in hopes that it would stand the blast, until about 2 AM - Lissy cries out that the water is a foot deep in her bed. About this time one of the windward guys gave way and down came the tent, and by this time we were all wet to the skin.

I crawled out from under the wreck, it was pitch dark excepting when it lightened. Pretty soon another flash discovered Lissy crawling out. Her night clothes sticking close to her skin, looking like a soaked ghost. We flew around, got the tent up again and crawled into it to try and weather it out until morning. Planting ourselves around the tentpole, wrapping ourselves in wet blankets, we tried to gather warmth by huddling close together.

Thus we passed the remainder of the night till break of day.

Loren told me to keep Lissy warm and he would try to build a fire. After a long time, he succeeded in getting a light blaze, but little warmth. During the day it continued to snow, rain and blow from the northwest a perfect hurricane and in vain we endeavored to create a fire sufficient to give us a little warmth. Shiver and shake was the order of the day.

Loren succeeded in getting Lissy over to a squatter's cabin nearby, where she was made comfortable. After this we succeeded in making the tent more comfortable by building a small fire in the middle of it, and laying close to the ground we escaped the smoke in measure.

Towards night the storm abated. And with the assistance of a bottle of whiskey, we passed the evening very pleasantly. Boots froze and all hands chilled through, but a clear day is before us, though cold.

Ice made one quarter inch thick last night. Have to lay here another day to dry our blankets and clothes. Everything is wet through and froze stiff this morning.

Editor's note: This article is a taste of a first-hand account of 1800s traveler and prospector Daniel Jenks from the new book "The Lost Gold Rush Journals" by Larry Obermesik of Hanover. The book covers Jenks' experiences - in his own words, transcribed from his journals - of the California Gold Rush and then his arrival in Colorado south of Fountain. Obermesik's story was featured in our Dec. 1 issue. Obermesik is a member of the Fountain Valley Historical Society.