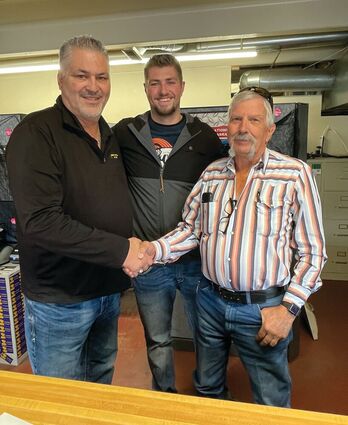 Garth and Shane Stehlik with Ron Book after Book sold Book's Automotive in Fountain to the Stehlik family.

Book's owner Ron Book retired after selling the business in December to Garth and Kathi Stehlik of Colorado Springs. The Book family started the business in 1939, and it may have been the oldest business in Fountain.

The new owners are long-term Coloradoans who moved from Denver to Colorado Springs in the late 1980s. They and their son Shane also own Stehlik's Auto Service at 2410 N. Powers Blvd. Frontage Road in Colorado Springs.

Kathi Stehlik said her husband has been in the auto repair and tire business more than 30 years, all of it in Colorado. She said the decision to acquire Book's became clear when she and Garth realized it was just what they had been looking for.

"We were looking at adding either a North or South location and as good fortune would have it, Book's Automotive was for sale and that clinched the deal," she said. "We were pleased to find a nice family-owned business with a good reputation that we could continue on in a similar vein."

Garth Stehlik has worked in the automotive and tire business since age 16. His father worked for Goodyear most of his adult life until he purchased two Goodyear locations in 1989. Garth worked in management for his father's business for 28 years and eventually was the operations manager for four Colorado locations. Shane Stehlik, Garth and Kathi's son, worked in automotive parts retail for two years and then five years for his grandfather's Goodyear shops.

On Sept. 12, 2018, Garth and Kathi opened their own locally owned Goodyear named Stehlik Service and Tire, Inc. After three years, they decided to pursue a second location.

Kathi also said about Ron Book, "We felt a kindred spirit. We all got along great." She said their new shop will continue to feature great professional service, and that they will have a larger focus on tires. 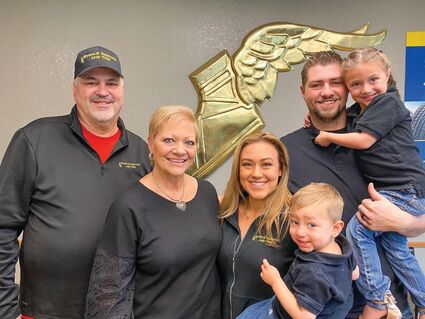 The Stehlik family is shown in this submitted photo.

"We are just like you," Kathi said. "We are a family, we work hard, and like you, just want a fair deal with great service."

Last week, the Fountain City Council recognized Ron Book for his family's long-term business contributions to the area. Ron explained the historical significance this way: "When we bought that corner, there was no interstate."

Mayor Pro Tem Tamara Estes added that the population in Fountain in 1940, just after the shop opened, was just 571.

"We've come a long way, and we greatly appreciate the service you've given to the community all of these years," Estes said.

Mayor Sharon Thompson presented him with a city coin and a certificate, and thanked him and similar small business owners for their dedication to the community.

"It's been an awesome ride," Ron noted.