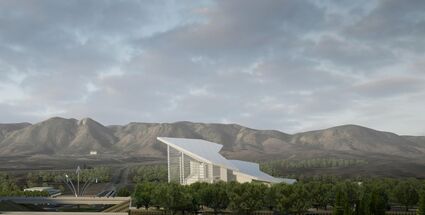 The project is planned outside the Academy's North Gate on 57 acres of Air Force property and designs include a publicly accessible commercial hotel, conference center and office space.

The new visitor center is designated an official Colorado Welcome Center and the project, collectively named True North Commons, is the fourth and final City for Champions project designed to add dimension, energy and economic vitality to the Pikes Peak region.

"This project will reimagine how we welcome visitors not only to our campus, but to the entire region," said Lt. Gen. Richard M. Clark, U.S. Air Force Academy superintendent. "For some of the most promising young people our nation has to offer, the journey toward leading the Air Force and Space Force begins right here in Colorado Springs. The new visitor center will tell the story of our Academy and its critical mission, and we are grateful for the supportive partnerships turning a bold vision into reality."

Plans for the 32,000-square-foot visitor center include modern, interactive and informative displays and experiences. The grand atrium may feature aircraft, spacecraft and satellites ascending toward the ceiling to represent Air Force and Space Force missions. Hands-on experiences may feature glider controls attached to a craft suspended from the ceiling and a speed challenge test to allow visitors to experience running at the local altitude. Other exhibits feature Air Force Academy history and athletics.

Touted as the Gateway to the Pikes Peak Region by Colorado Springs Mayor John Suthers, the Academy averaged one million visitors annually in pre-COVID years. The Academy's current visitor center was designed in the 1980s and is a 10-minute drive inside the Academy from the North Gate.

"We're incredibly excited for this modern update to the Academy visitor experience to move forward," said Carlos Cruz-Gonzalez, Academy Director of logistics, engineering and force protection. "The new visitor center is designed to look like an aircraft wing, perfectly illustrating our flying mission."

Once work is complete, Academy staff will begin installing displays in the new center. The project is a formal partnership between the U.S. Air Force Academy and Blue & Silver Development Partners, LLC. Community partners in the effort include the City of Colorado Springs, the Association of Graduates and Air Force Academy Foundation.