Standoff in Security ends after use of gas munitions 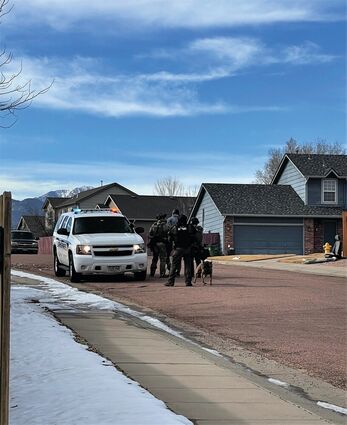 The El Paso County Sheriff's Department arrests a man after a three-hour standoff on Excursion Drive in Security on Feb. 10.

A standoff between the El Paso County Sheriff's Office and a Security resident who refused to cooperate on a domestic violence arrest warrant ended peacefully Thursday after about three hours in a neighborhood near French Elementary School.

"It was confirmed he was wanted based on an active arrest warrant for domestic violence-related charges including felony menacing," Sgt. Jason Garrett said. "Deputies from our Patrol Division responded, confirmed he was inside, and attempted to take him into custody, but he refused to exit the home. Information was obtained indicating he was heavily arme...