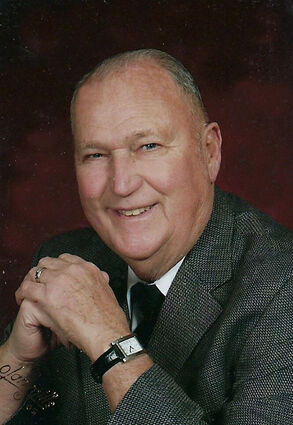 TSGT-Franklin J. Cribbett, USAF (Ret) went to be with his Lord and Savior on February 4, 2022. Frank was born in Thomasboro, Illinois, on April 11, 1932, to George F. and Anna (Kline) Cribbett. He attended school in Thomasboro for several years and graduated from Rantoul High School in 1950. He met the love of his life Amanda (Teeter) in the spring and married her on December 30, 1950.

He worked on the Illinois Central Railroad in summers and prior to enlistment in the Air Force. In 1951 after basic training in Wichita Falls, TX, Frank attended special training in Cheyenne, Wyoming and Bellville, Illinois and Sumter, South Carolina. During his 22-year career in communications as a Non-Commissioned Officer he was stationed in Sembach Germany, Omaha, Nebraska and Denver, Colorado and San Antonio, Texas, Hopedale Labrador, Benton AF Station Pennsylvania, Clark AF Base Philippines, and finished as supervisor of the NORAD digital relay center in Cheyenne Mountain. He received numerous commendations, promotions and decorations prior to his retirement in 1973. Frank worked after retirement as a Manager of Spirits House and driver at Fountain Auto Auction.

He was well known and involved in the Security-Widefield community. Frank became a member of the Good Shepherd United Methodist Church in 1967. He was a part of United Methodist Men, he served on many committees at the church and volunteered in numerous capacities. He loved fishing and traveling with his brother-in-law Curt McDaniel and sister Orlena McDaniel (deceased), playing games with friends, cheering for his Pittsburgh Steelers, and spending time with his family.

He was preceded in death by his parents, brothers Edward and William, and sister Lucille Frerichs. He is survived by his wife of 71 years, Amanda, four daughters: Virginia (Tom) Lilze of Penrose, CO, Donna (Richard) Diamond of Akron, CO, Susan (Michael) Moberly of Fountain, CO, and Sandra (Duff) Seaney of Austin, CO. He also leaves behind eight grandchildren and ten great-grandchildren. We all will miss his teasing, wonderful sense of humor and "it's a great day to go to Cripple Creek". Frank lived his life according to the verse "Faith, Hope, and Love and the greatest of these is love" 1 Corinthians 13:13. The blessing of his love will always be a part of us.

Fond memories and expressions of sympathy may be shared at http://www.dove-witt.com for the Cribbett Family. In lieu of flowers, please donate to Abode Hospice of Colorado Springs or Good Shepherd United Methodist Church, Security-Widefield.