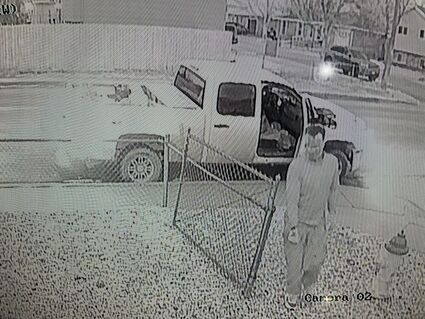 On Monday, Feb. 28, at approximately 6:15 a.m., Fountain police officers were dispatched to the area of Crest Drive and Sunnyland Loop Lane for an aggravated robbery. Reports stated the suspect attempted to steal items from an unoccupied vehicle. The owner of the vehicle approached the suspect and an altercation ensued. The suspect then fled the scene.

The suspect is described as a 25- to 35-year-old white male, approximately 5-foot-10 to 6-foot-1, and 200 to 220 pounds. He was last seen wearing a mask, gloves, sweatshirt and sweatpants. The suspect fled the scene in a mid-2000s model Chevy Silverado Crew Cab with black wheels and a tool box in the bed of the truck.

This continues to be an active investigation. Anyone who can identify this individual or has any other information reference this investigation, is asked to contact El Paso County Communications at (719) 390-5555.

To remain anonymous, contact Crime Stoppers Tip Line at (719) 634-STOP (7867) or http://www.crimestop.net. If your information leads to a felony arrest, you could be eligible for a cash reward.