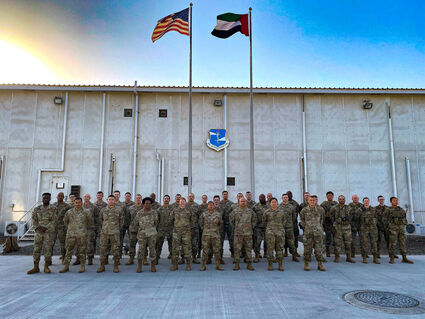 About 50 U.S. Air Force Reservists from the 302nd Airlift Wing are currently forward deployed to Al Dhafra Air Base, United Arab Emirates, on Feb. 28. The 302nd is home based at Peterson Space Force Base. Reservists are working alongside active duty and Air National Guard Airmen to make up the 380th Air Expeditionary Wing at Al Dhafra.

Senior Airman Gilbert La Febre III says he's learned something about himself during his first deployment as a member of the U.S. Air Force.

"I can bounce back pretty quick," he said.

La Febre is one of about 50 Citizen-Airmen of the Air Force Reserve's 302nd Airlift Wing who are currently forward deployed to Al Dhafra Air Base in the United Arab Emirates. The base came under missile attack several times in January – La Febre says that's when he and his fellow Airmen learned just how resilient they are.

"You deal with it and then you get back to work," La Febre said of the attacks.